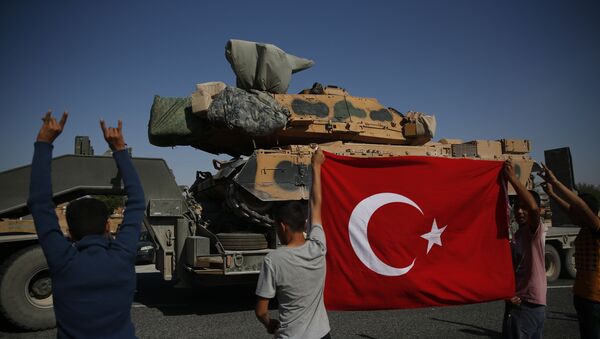 Omer Ozkizilcik, who works at the Security Department of SETA Foundation, an independent, nonprofit and non-partisan think-tank based in Ankara, Turkey, gave his opinion on the situation.

How justified are Trump's plan to impose sanctions on Turkey and what is the reason for rhetoric from the West against Turkey now?

First of all, Turkey did not start this operation hoping that the Trump administration would greenlight it. Turkey had already accepted any possible sanctions or other forms of punishment, as this operation is too important for Turkey. Turkey tried the diplomatic track, it didn’t work. This is a national security issue, and Turkey is ready to accept any kind of sanctions. This will neither hinder Turkey from going forward, nor end this operation. I can only underline here two main aspects. First, there are those who criticize just to criticize the Trump administration. But there are also many who have been affected by the engagement between CENTCOM and the PKK and the PKK propaganda. And actually it’s no wonder because we know that the PKK has real big propaganda support and they have been affected by the PKK.

The US senator Lindsay Graham stated that the Trump's plan to impose sanctions on Ankara “will be a game-changer in all the wrong ways for Turkey”. How will these sanctions impact Turkey?

Obviously, sanctions will have an impact on Turkey and Turkey’s economy and also on Turkey’s defence industry. There is much rhetoric, but we have to wait and see how much really happens. Because, it could also be an attempt by the Trump administration to ease the internal pressure on him. If may not, we don’t know. No one can foresee what the Trump administration will do. But if there’s any sanctions, yes the Turkish economy will be affected. But we have seen before that sanctions, especially on the defence industry, only increase Turkish efforts to increase the capacity of their defence industry. And economic sanctions will only push Turkey more towards Russia.

What is Trump trying to achieve by withdrawing troops from northern Syria and declaring that he will impose sanctions on Turkey?

First of all, the withdrawal decision by Trump is just realpolitik. Because anyone who has a bit of an idea about the situation on the ground cannot act differently. So Trump is maybe one of the most rational actors on the American side. Because when the Turkish army enters Syria what will the Americans do, fight against a NATO ally for the sake of some terrorist organization? Secondly, I think Trump does not really care about non-state actors, Trump is after great power politics. Great power politics needs to be at the international level between states, and Trump knows that the YPG or the PKK is just not worth enough to risk direct confrontation with the Turkish armed forces.

How will the recent events in northern Syria impact Turkey’s relationship with NATO allies (especially from the EU)?

I think that when the dust settles down and there isn’t any kind of real sanctions or any kind of real attack against Turkey, I expect that relations will normalize again. They have fought together for years, they fought together in Korea. They have many relations together. I don’t think that NATO is so weak that it will crumble down over Syria. However, if the Americans go mad and push Turkey more towards Russia, I think then maybe the NATO alliance will become deficient as an effective force. Weakening Turkey means weakening NATO.