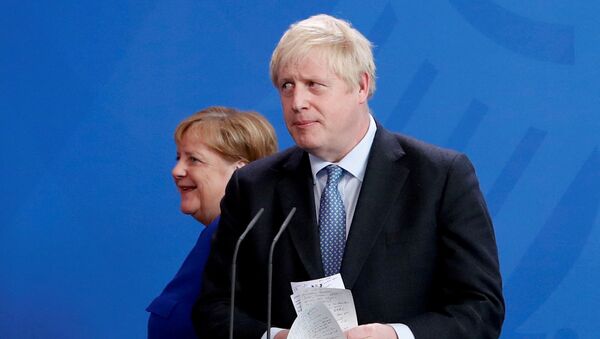 Although a further delay of the EU-UK divorce is reportedly looming, as Prime Minister Boris Johnson’s new Brexit plan is still awaiting an agreement from the bloc, at least one European leader seems to accept that London is leaving and has even braced herself for the subsequent tensions.

German Chancellor Angela Merkel, who will meet with other European Union leaders on Thursday, listed the UK among the bloc’s potential competitors, alongside China and the US, after London leaves the EU. Although both sides have previously voiced their intention to act as partners following Brexit, the remark by the head of the European powerhouse has prompted the outlet Politico to recall a warning issued by EU leaders not to eliminate tariffs under a future trade deal if the UK does not commit to responsibilities such as state aid.

"We will do all this in the knowledge that with the departure of Great Britain, a potential competitor will of course emerge for us. That is to say, in addition to China and the United States of America, there will be Great Britain as well”, Merkel said, as cited by the outlet, before a working dinner with her French counterpart Emmanuel Macron.

The German politician has called on Europe to show what the EU can achieve, meaning to “work faster, work more consistently”. She also noted that the new European Commission, headed by President-elect Ursula von der Leyen, “should also become operational as quickly as possible", apparently referring to the difficulties that the new team making up the key EU body is facing after France's nominee, Sylvie Goulard, was rejected by MEPs.

Macron was more specific, calling for unity in the face of Brexit, which deadline on 31 October coincides with the last day in office of Jean-Claude Junker’s commission.

“I want us, with Chancellor Merkel and President-designate of the Commission, Mrs von der Leyen, to be able to build a strong Commission based on a solid majority in the European Parliament that we all have the responsibility of building. In this particular moment, Europe cannot allow itself the luxury of vain quarrels and small fights or to add internal crisis to the tensions of the world", he said.

Boris Johnson, striving to stick to the current deadline, presented his new Brexit plan, removing the Irish backstop and leaving Northern Ireland within the UK customs area, while following EU rules and standards on all goods. However, as EU leaders have indicated that it will not be possible to agree on a Brexit deal before Thursday’s EU Council meeting, it may be unrealistic to present an agreed deal at a special session of the British Parliament on Saturday, thereby potentially postponing Brexit much further.

In this case, Boris Johnson would have to request an extension of Article 50 under UK law, an option that he has repeatedly rejected, urging Britain to leave the European Union by 31 October, with or without a divorce agreement.