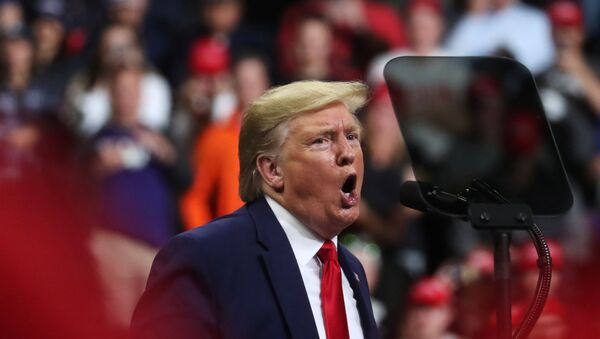 US President Donald Trump has called Democratic Representative Rashida Tlaib a “despicable” person after the congresswoman from Michigan revealed to Detroit Deadline that House Democrats have discussed jailing some members of the Trump administration mentioned in the impeachment investigation for their refusal to testify.

“A despicable human being!” Trump wrote, retweeting a post from his assistant and White House Director of Social Media Dan Scavino that linked to a Hill article where Tlaib discussed the Democrats’ initiative.

Scavino himself commented on the article with the sarcastic remark, “Sounds about right. COUP!”

A despicable human being! https://t.co/3KpgUuRaXU

Rashilda Tlaib, who has been a longstanding critic of Donald Trump and has been substantially involved in the impeachment inquiry against the US president, said in an interview with Detroit Deadline that the Democrats had “serious discussions” about jailing Trump administration officials who were defying subpoenas that were issued to them by House Democrats.

“There have been actual serious conversations about what the logistics would look like ... if we did have to force someone through a court order to come before the Congressional committee. This is pretty uncharted territory for many of us and even for Congress”, Tlaib said, as quoted by The Hill.

Donald Trump has not been a fan of the Democratic representative in the past either, having called her an anti-Semite and a crazed lunatic, as well as criticised Tlaib’s support for an open door border policy.

On 24 September, House Democrats initiated an impeachment inquiry against Donald Trump, accusing him of abuse of power and compromising US national security and the country's electoral system. The Trump administration subsequently informed Congress that it would not cooperate with the inquiry, describing it as an attempt to overturn the results of the 2016 election.

However, Trump’s Ambassador to the European Union Gordon Sondland later defied an order to not cooperate with the investigation and met with congressional representatives last week, despite having earlier refused to do so.

Several other subpoenas have been issued to White House officials mentioned in the impeachment inquiry, including US Energy Secretary Rick Perry, with many of the summoned individuals, however, refusing to testify.

The inquiry was launched based on a whistleblower complaint in relation to a 25 July phone call between Donald Trump and Ukrainian President Volodymyr Zelensky, claiming that the POTUS had threatened to withhold military aid to Ukraine if Kiev failed to probe alleged illegal business activities of Joe Biden’s son Hunter in the country. Donald Trump denied any wrongdoing and accused House Democrats of waging a political witch hunt.