Not His Thing: PewDiePie Explains His Attitude to Politics, Donald Trump 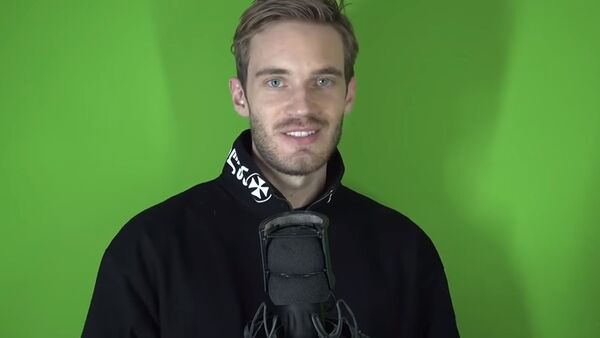 © Blogger photo YouTube/Pewdiepie
Subscribe
Although Swedish blogger Felix Kjellberg has become one of the most influential YouTube creators, hitting a record 100 million subscribers this year, he has distanced himself from politics and any related debates. But this has not spared him from a number of controversies, including being associated with the Christchurch mosque shooting.

The most subscribed individual on YouTube, PewDiePie (whose real name is Felix Kjellberg), has in an interview with The New York Times revealed that there is not a single politician in the world that excites him. According to journalist Kevin Roose, who spoke to the YouTube king, he “insists he's not interested at all” in politics, unless it makes a good joke.

Although incumbent US President Donald Trump has featured in PewDiePie’s videos, the blogger explained that he brought POTUS up as he "became a meme for a while", noting that he moved on after it "stopped being funny".

However, even though the goofy Swede has distanced himself from politics, he has been dragged into several scandals, including one after the New Zealand mosque attacker called on people to subscribe to Pewds. According to the NYT journalist, he looked "genuinely pained" when the tragedy was brought up. As the YouTube comic revealed, this became a major turning point and prompted him to toy with an idea of deleting his channel, even though it was not a serious consideration.

But PewDiePie does not seem to be living in a political vacuum: for example, he has talked about his disagreement with Brexit, revealing that he was planning to move from the UK to Japan. But, at the same time, he cancelled one of his series on trending news called “Pew News” and shifted his focus mostly to the safer haven Minecraft and gaming videos.

000000
Popular comments
I am always amazed at lamebrain adults such as PewDie Pie at his age playing childrens games and jamming the other lamebrains with foolishness can prosper without actually working for a living ......
highball
14 October 2019, 23:51 GMT1
000000
highball, Why should he work when he's getting paid for what he's doing?
Gung Ho
15 October 2019, 05:05 GMT
000000
Newsfeed
0
New firstOld first
loader
LIVE
Заголовок открываемого материала
Access to the chat has been blocked for violating the rules . You will be able to participate again through:∞. If you do not agree with the blocking, please use the feedback form
The discussion is closed. You can participate in the discussion within 24 hours after the publication of the article.
To participate in the discussion
log in or register
loader
Chats
Заголовок открываемого материала
Worldwide
InternationalEnglishEnglishMundoEspañolSpanish
Europe
DeutschlandDeutschGermanFranceFrançaisFrenchΕλλάδαΕλληνικάGreekItaliaItalianoItalianČeská republikaČeštinaCzechPolskaPolskiPolishСрбиjаСрпскиSerbianLatvijaLatviešuLatvianLietuvaLietuviųLithuanianMoldovaMoldoveneascăMoldavianБеларусьБеларускiBelarusian
Transcaucasia
ԱրմենիաՀայերենArmenianАҧсныАҧсышәалаAbkhazХуссар ИрыстонИронауОssetianსაქართველოქართულიGeorgianAzərbaycanАzərbaycancaAzerbaijani
Middle East
Sputnik عربيArabicArabicTürkiyeTürkçeTurkishSputnik ایرانPersianPersianSputnik افغانستانDariDari
Central Asia
ҚазақстанҚазақ тіліKazakhКыргызстанКыргызчаKyrgyzOʻzbekistonЎзбекчаUzbekТоҷикистонТоҷикӣTajik
East & Southeast Asia
Việt NamTiếng ViệtVietnamese日本日本語Japanese俄罗斯卫星通讯社中文（简体）Chinese (simplified)俄罗斯卫星通讯社中文（繁体）Chinese (traditional)
South America
BrasilPortuguêsPortuguese
NewsfeedBreaking
14:30 GMTVideo: Police Act Against Climate Protesters Blocking M25 Motorway
14:15 GMTRonaldo Will Cause as Many Problems as He Solves for Solskjaer, Ex-Liverpool Player Carragher Says
14:03 GMTXi Urges SCO to 'Resist' External Meddling After US, Australia Vow to Bolster Ties With Taiwan
14:02 GMTUN Security Council Holds Meeting on Afghanistan
13:39 GMTHitting US Debt Ceiling Could Trigger Recession, White House Says
13:32 GMTUnited Airlines Briefly Grounded Flights in US, Canada Due to Computer Issues, FAA Says
13:29 GMTDutch Acting Defense Minister Resigns Over Kabul Evacuations Chaos, Reports Suggest
13:27 GMTFrance Says It Cannot Trust Australia in Trade Talks After Canberra Ditched Joint Sub Deal
13:20 GMTPiers Morgan Says His New Job Will Be 'Stuff of Nightmares' for Meghan Markle
13:18 GMTIndonesia Wary of Australia's Plans to Acquire Nuclear Submarines
13:14 GMTUS Slaps New Hezbollah-Related Sanctions on Several Individuals
12:57 GMTPakistan Will Get ‘Badly Burnt’ If It Courts the Taliban Beyond a Point, Warns Author
12:51 GMTUS General Mark Milley Reportedly Downplayed George Floyd Protests' Severity in Talks With Trump
12:51 GMTIs Narendra Modi Emerging as the Most Sports Loving Indian Prime Minister?
12:28 GMTFAA Bans Drone Flights Over Texas Bridge After Thousands of Haitians Filmed Flocking to Area
12:27 GMT'Show Got It Wrong': Priyanka Chopra Apologises After Taking Flak Over 'The Activist' Format
12:05 GMTNicki Minaj Tweet That COVID-19 Vaccines Cause Impotence Sparks Protest Outside CDC HQs - Video
12:01 GMTPelosi Asked After Capitol Riot If WH Staff Did Anything But 'Kiss' Trump's 'Fat Butt', Book Claims
11:48 GMTArmenian Police to Block Streets Near Central Square Due to Planned Rallies
11:32 GMTUK Military 'Actively Recruiting' New Spies for Deployment in Asian Region Amid AUKUS-Caused Waves