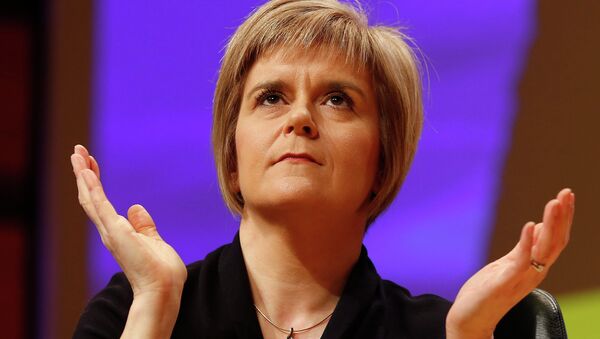 First minister of Scotland Nicola Sturgeon has said that she will formally request consent from Westminster for another Scottish independence referendum “over the next matter of weeks” amid uncertainty over Brexit and increasing support for an autonomous Scotland among the population, the politician revealed during The Andrew Marr Show on the BBC on Sunday.

When asked about whether she would seek a Section 30 order this year, which would formally allow Scotland to hold another independence referendum, Sturgeon replied “Yes”.

“I’m putting legislation through the Scottish Parliament right now, to put the rules and regulations in place. As that legislation progresses we will make that request for a Section 30 order", said Scotland’s First Minister. “It is likely to be over the next matter of weeks. It is coming soon".

“We don't yet know who is likely to be in Downing Street, the situation is very fluid. That's why I've taken the decision to do it now, the preparations that are within our control here right now and we're getting on with it", Sturgeon added.

The First Minister of Scotland also said that Jeremy Corbyn should not even “bother” to ask her Scottish National Party (SNP) to support a potential Labour government unless he backs the Scottish independence vote.

“But I say this to Jeremy Corbyn or any Westminster leader who’s looking to the SNP for support, if you don’t accept Scotland’s right to choose our own future at a time of our own choosing, don’t even bother picking up the phone to me", Sturgeon said during the show.

In the meantime, a recent Panelbase survey for The Sunday Times Scotland revealed that support for Scottish independence has risen to a record 50% - a five point increase from a similar poll carried out last year. Moreover, 45% of respondents agreed with the statement that Scotland would be better off economically as an independent country within the EU, rather than staying in the UK after Brexit, in comparison to 35% of people who disagreed and the rest remaining unsure.

Back in 2014, only 45% of people supported Scottish independence during the referendum vote – around 1.6 million – as opposed to 55% who decided to stay within the United Kingdom.

Scotland also heavily opposed the Brexit referendum results. Only 38% of people who came to cast their vote supported leaving the European Union. Nicola Sturgeon previously urged Boris Johnson to resign following the Brexit turmoil, calling his new Brexit plan “unacceptable” as it would still leave Scotland outside of the EU single market and customs union.