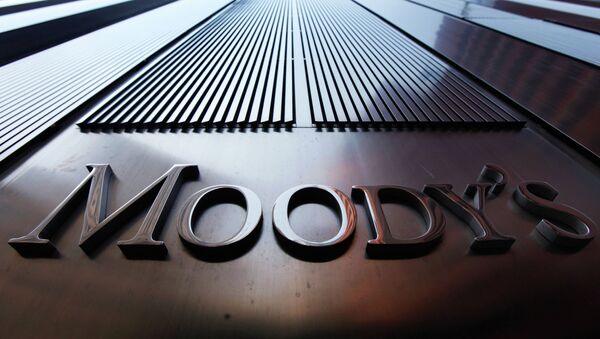 © REUTERS / Mike Segar/Files
Subscribe
In phase 1 of the trade deal, POTUS reported that Beijing and Washington agreed on currency exchange, technology transfer, as well as the purchase of up to $50 billion worth of US agricultural goods by China. The agreement, which is to be further elaborated, is hoped to mend trade ties between the world’s two top-producing and earning economies.

According to a Moody’s briefing, a potential US-China deal implies temporary easing in tensions, while a delay in further tariff increases removes the “immediate risk to growth in both Asia and the US".

The bond credit rating company notes that if a limited China-US agreement comes along, it will fail to resolve the underlying areas of disagreement between the two sides, with long-term divergence in US and Chinese national interests penetrating a whole host of spheres, from trade and technology to investment and geopolitics.

The company predicts that ensuing rounds of bilateral talks will remain no less challenging, with financial markets demonstrating further volatility.

On Friday, the White House announced it was suspending a tariff increase to 30% on at least $250 billion worth of Chinese goods, which was set to go into effect beginning on Tuesday. However, there was no backtracking on the tariff hike introduced in September, and a tariff hike projected for just before Christmas, on 15 December, also remains in place. Chinese media, however, while lauding the partial breakthrough, sounded cautious about the upcoming developments:

“The Champagne should probably be kept on ice, at least until the two presidents put pen to paper", wrote China Daily on Sunday.

"As based on its past practice, there is always the possibility that Washington may decide to cancel the deal if it thinks that doing so will better serve its interests”, the state media outlet noted, pointing at the Trump administration’s utmost unpredictability with regard to foreign policy.

In a similar manner, People’s Daily, owned by the Chinese Communist Party, reiterated the sentiment in its editorial on Saturday, right after the White House’s announcement:

"There are no winners in a trade war, and both parties must not fall into a lose-lose trap".

POTUS Trump remarked that the first phase of the trade deal will be cut over the next few weeks, whereby it had been agreed that China would purchase between $40 billion and $50 billion in US agricultural products. Trump went on to assert, while meeting Chinese Vice Premier Liu He in the Oval Office that phase two will kick off almost without delay, right after the first phase is signed.

This partial agreement, however, doesn’t touch upon a whole number of problematic, sensitive (as of late) spheres like cyber security, as well as Chinese tech giant Huawei and the operations of the blacklisted companies, according to Christiaan Tuntono, a senior economist for Asia Pacific at Allianz Global Investors.

In the meantime, China’s Commercial Ministry said that negotiators from Beijing  and Washington achieved sizeable progress in a range of area during the latest round of high-level talks.

Last week, the US Department of Commerce added 28 new companies and agencies to its operational "blacklist" of Chinese firms banned from proceeding with their business in the United States. Also, amid a non-stop exchange of tariff rounds over the past year, reports emerged last September that the White House was mulling investment limits on China.

The US and China, the world’s two largest economic powers, have been engulfed in a lengthy trade war, which has been on and off for over a year, casting a shadow over financial markets and global growth at large.

000000
Popular comments
“My deal with China is that they will IMMEDIATELY start buying very large quantities of our Agricultural Product, not wait until the deal is signed over the next 3 or 4 weeks. THEY HAVE ALREADY STARTED!...”- Trump’s tweet on 10/13. There should be no excuses made for Megalomaniac Zionist Trump’s deceptive statements.