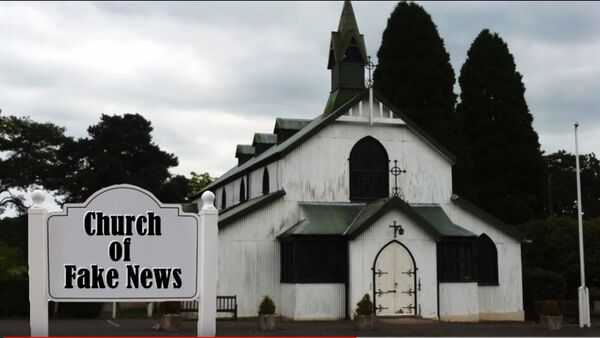 © Photo : YouTube / TheGeekzTeam
Subscribe
The video is a doctored version of the infamous Kingsman church scene, praised for its supreme camera work and criticized for its extremely graphic content.

The edition, which claims to have obtained a video shot by one of the attendees on their phone camera, provided a text description, but did not upload the footage. According to the description, it is a ‘Trumpsman’ video uploaded on YouTube by TheGeekzTeam channel in 2018.

The video is a crudely-edited infamous Church Scene from 2015 dark comedy movie Kingsman, in which Colin Firth’s super-secret agent Galahad massacres the parishioners under the influence of mind control – only with actor’s faces superimposed with those of Trump, his critics and logos of the US media and other organizations.

Other victims bear the logos of CNN, NBC, Politico, The Washington Post, Vice News and even Black Lives Matter. The footage ends with Trump standing at the altar contemplating the dead. The whole action takes place in the ‘Church of Fake News.’

When contacted by the Times, campaign officials appeared confused. Trump spokeswoman Sarah Sanders, who attended the conference, said she did not see the video, but added that she “does not support violence of any kind against anyone.”

Tim Murtaugh, a Trump campaign spokesman, also said that he knew nothing about the video.

“That video was not produced by the campaign, and we do not condone violence,” he said.

American Priority, the organizer of the meeting, reportedly admitted that the video was indeed played as a part of a “meme exhibit,” but added that they were looking into how the video appeared at the event.

“Content was submitted by third parties and was not associated with or endorsed by the conference in any official capacity,” said organizer Alex Phillips. “American Priority rejects all political violence and aims to promote a healthy dialogue about the preservation of free speech. This matter is under review.”

According to the Times, the footage bears a resemblance to a clip Trump tweeted in 2017, in which he is depicted as a wrestler defeating the CNN logo. Critics condemned the tweet, calling it an endorsement of violence against journalists while Trump supporters praised it, all of which helped the tweet to go viral.

"The WHCA is horrified by a video reportedly shown over the weekend at a political conference organized by the President’s supporters at the Trump National Doral in Miami," the association president said. "All Americans should condemn this depiction of violence directed toward journalists and the President’s political opponents."

Trump has repeatedly criticized US mainstream media for unfavorable coverage of his behaviour, actions and policies. At a Friday rally, the president once again condemned what he referred to as an “unholy alliance of corrupt Democrat politicians, deep-state bureaucrats and the fake news media,” the Times stated.