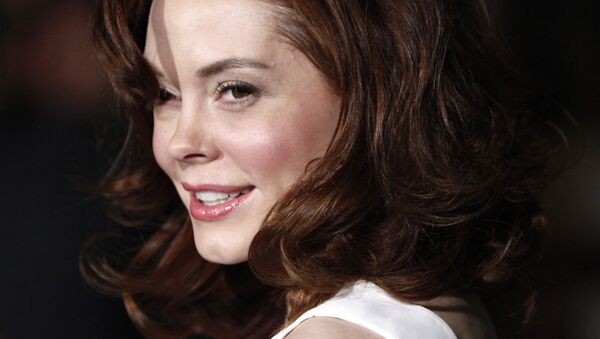 The former starlet became one of the loudest voices of the MeToo movement after decrying Harvey Weinstein as a sex predator in a story by Ronan Farrow. New claims that former presidential candidate Hillary Clinton’s staffer tried to pressure Farrow to drop a probe into the embattled Hollywood producer prompted Rose McGowan to launch a fresh attack.

The fresh story is based on the new book “Catch and Kill” by journalist Ronan Farrow, whose 2017 investigation brought accusations of predatory behaviour against the producer into the spotlight. According to The Hollywood Reporter, citing the book’s release, Weinstein attempted to pressure Farrow by using his relationship with Hillary Clinton, as the journalist received a call from her publicist Nick Merrill telling him that the "big story" he was working on was a "concern for us" in summer 2017. Shortly after this, the producer reportedly proposed creating a docuseries on the Democratic presidential candidate to former President of NBC News Deborah Turness, who is in charge of NBC News International now.

McGowan reacted to the report with an angry Twitter tirade, saying that she knew “Hillary Clinton’s people were protecting the Monster”. She also apparently hinted at the sex scandals that the former secretary of state’s husband, Bill Clinton, was involved in.

“I can’t believe I used to support her. I guess predators are her style”, she posted, adding in a following tweet: “Hillary Clinton, did you have any concern for your husband’s victims? And what about HW victims? No? Didn’t think so”.

I knew that Hillary Clinton’s people, were protecting the Monster. I can’t believe I used to support her. I guess predators are her style. https://t.co/rzWUoV1Nf4 via @thr

​McGowan also referred to the ongoing impeachment scandal over allegations that Donald Trump abused his power by pressing Ukraine to investigate his political rival Joe Biden’s son, and said that there is no difference to her between the incumbent US president and Hillary Clinton.

“I am against abuse of power, whether it be Trump, Clinton, HW, @NBC... the list is long. I’m not raging, I just really, really dislike liars and those who protect them”, she wrote, urging for “monsters” to be called out.

​Many netizens seemed to share McGowan’s stance and lambasted Clinton.

Thanks, Rose. Hillary tried to destroy us, but like you, were still here.

Bill is a serial rapist and she covered for him for decades. She is every bit as vile and disgusting as he is. How otherwise rational people refuse to see it is beyond me.

All she cared about is how much power she can have

​Others, however, stood up for the former first lady, arguing that she was a victim herself.

Please don’t go after or attack Senator Clinton, not only was she a victim their daughter was a victim. In reality her only concern was for her wellbeing and that of their daughter.