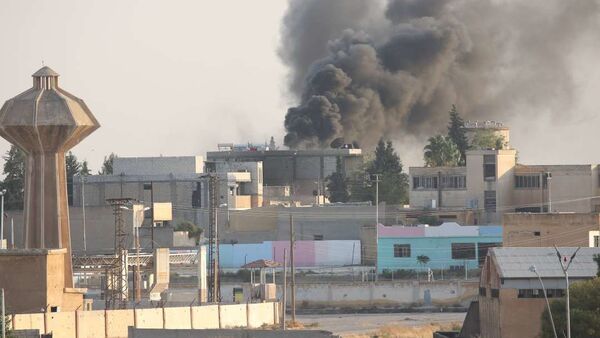 Ankara is pressing forward with its military operation in northern Syria despite harsh criticism from the EU, the United States and the Arab League, who are considering possible sanctions and diplomatic measures against the country.

The Turkish military and local fighters supported by Ankara continue to move ahead with "Operation Peace Spring" in Syria, aimed against the Daesh* terrorist group and the US-backed Syrian Democratic Forces (SDF). A day earlier saw battles in the border city of Ras al-Ayn, as both Turkey and the SDF claimed they had gained control over its centre. According to Ankara, its forces have neutralised 415 militants since the start of the op.

The ground offensive was announced earlier this week by President Recep Tayyip Erdogan, who vowed to continue it despite major pushback from the EU, the US, and Arab States. 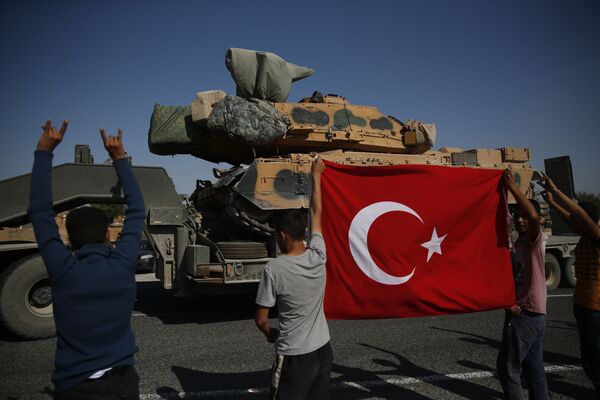 According to his Foreign Minister Mevlüt Çavuşoğlu, the op was launched under Article 51 of the UN Charter and UN Security Council Resolutions regarding the fight against terrorism because Turkey considers the Kurdish troops to be affiliated with Kurdistan Workers' Party (PKK) that Ankara has blacklisted as a terror organisation.

Damascus, however, stressed that the operation is another violation of Syria's sovereignty. The Arab League also opposed Ankara on the issue and is considering halting military cooperation and lowering of diplomatic ties with Turkey. At the same time, France and Germany have already halted arms exports to Ankara, urging the Middle Eastern country to stop the offensive.

According to the Turkish military, one of the US observation points in southern Ayn Al-Arab district of Syria's Aleppo has been evacuated. There has been no statement issued on the reason for the evacuation so far.

Daesh (IS, ISIS banned in Russia) terrorists, who are held at seven prisons controlled by the Kurdish-led Syrian Democratic Forces (SDF), may flee the detention facilities amid Turkey's offensive in northern Syria, provoking a sharp escalation of the situation in the entire Middle East, Maj. Gen. Alexey Bakin, head of the Russian center for Syrian reconciliation said on Sunday.

"The possible exit of terrorists from detention can provoke a sharp deterioration of the situation in the entire Middle East region. All parties to the Syrian settlement must take measures to prevent this scenario," Bakin said.

The official also estimates that lives of at least 120,000 people, who are staying at eight SDF-controlled camps for temporarily displaced persons in northern Syria, are at risk amid the Turkish offensive.

A Sputnik correspondent has reported that the US Army has temporarily left the Ain Issa area east of Tell Abiad because of the Turkish offensive against Kurdish groups in north-eastern Syria. The troops were withdrawn in order to avoid coming under Turkish fire. According to the reporter, the troops were evacuated to military bases in the Syrian province of Raqqa.

The United States has also evacuated its military base in Jalabiya in the Syrian province of Raqqa, Syrian state TV reported. 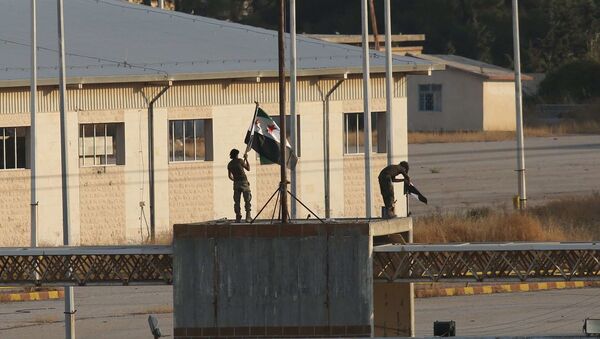 "We have a common desire that this offensive ends", Emmanuel Macron said, standing alongside Germany Chancellor Angela Merkel. "This offensive risks creating an unsustainable humanitarian situation and help Daesh re-emerge in the region". 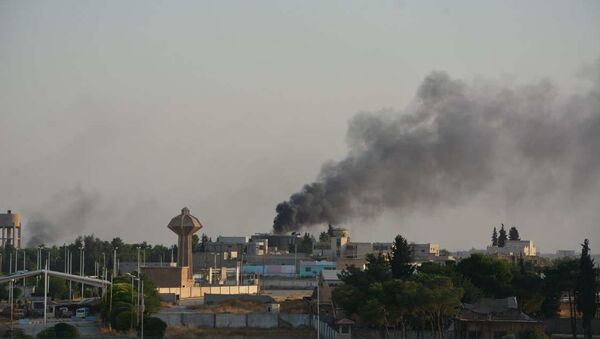 The Syrian government has started moving troops to the country's north, where the Turkish military operation Peace Spring is underway, in order to confront Turkey’s aggression, the Syrian news agency SANA reported.

"The Sochi Agreement [with the Russian Federation on Syria’s Idlib] is being successfully implemented as a result of our meetings in Tehran and Ankara. We are not talking about any problems with Russia. We are in touch with President Putin. If there is a question, we can negotiate and accept within 24 hours a joint decision on the steps to be taken", Erdogan told reporters in Istanbul, as quoted by Anadolu.

"They continuously broadcast disinformation about Daesh terrorists having fled the prison. They do it to incite the United States and the West. The leaders with whom I am in touch ask me about it all the time", Erdogan said at a press encounter in Istanbul.

The camp, located seven miles south of the Turkish border, is home to 7,000 displaced persons, among whom 785 are suspected members of Daesh. On Friday, the Kurdish administration announced plans to evacuate the camp's residents and move them to al-Arisha camp, south of the city of Hassakah.

"The total number of terrorists that have been neutralised during Operation Peace Spring is 490, of them 440 were killed. The near-border settlements of Turkey have been targeted by mortar and rocket attacks from Syria 652 times. During the shelling of our towns by terrorists, 18 civilians have been killed and 147 injured", Erdogan said in a television statement to the NTV broadcaster.

Two Turkish servicemen and 16 militants with the opposition Syrian National Army were killed during the military operation, Erdogan added.

In a phone call with Turkish President Recep Tayyip Erdogan, German Chancellor Angela Merkel "spoke in favour of an immediate end to the military operation", her office said in a statement.

Turkish forces have seized control of Syria's M4 highway, some 30-35 kilometres (19-22 miles) inside Syrian territory, as part of their offensive against Kurdish militants in north-eastern Syria, Turkey's Defence Ministry said on Twitter.

"We find these reports to be extremely troubling, reflecting the overall destabilisation of northeast Syria since the commencement of hostilities on Tuesday", a State Department spokesman said in a comment. The official added that Washington denounces any abuse and extrajudicial execution of civilians or prisoners, and is looking further into the circumstances of the incident.

US Defence Secretary Mark Esper stated that Donald Trump has ordered US forces in Syria to move south of Turkey's attacks against Kurdish forces, but not to leave the country.

Turkish forces have seized control of Syria's M4 highway, some 30-35 kilometres (19-22 miles) inside Syrian territory, as part of their offensive against Kurdish militants in north-eastern Syria, Turkey's Defence Ministry said on Twitter.

According to the Kurdish administration in northern Syria, several "mercenaries” (which could mean Turkish-backed militants) attacked the facility, while "Daesh elements" assaulted the guards and left the camp.

According to recent reports, Turkish troops, backed by Free Syrian Army (FAS) militants, have entered the city. At the same time, Turkish artillery is firing on Kurdish self-defence fighters.

According to Syrian broadcaster Ikhbariya, on Sunday Turkey occupied the border city of Suluk, which is located in the northeastern part of Raqqa Governorate.

"Turkish President Recep Tayyip Erdogan has held a telephone conversation with UK Prime Minister Boris Johnson. The president told Johnson about the goals of Operation Peace Spring and said that it would continue until the terrorist threat posed by the PKK — Syrian Kurds' self-defence forces — and the IS [Daesh] in northern Syria is completely eliminated, allowing the voluntary and safe return of Syrian refugees", the official statement read.

According to the Firat news agency, the Kurdish-led Syrian Democratic Forces (SDF) said that they had attacked the Turkish Army in the Syrian city of Ras al-Ayn, leaving 75 soldiers dead and seven tanks destroyed, while 19 more Turkish troops were injured.