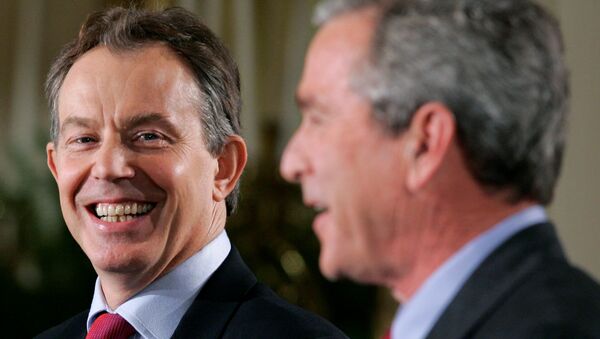 © REUTERS / Gary Hershorn
Subscribe
Katharine Gun is now in the spotlight again, but this time not for exposing classified information. A film discussing illegal US activities prior to the 2003 invasion of Iraq premiered in London this week.

Katharine Gun said that she hopes a film about her will make the public reconsider their attitude towards UK Prime Minister Tony Blair and US President George W. Bush, who were behind the military action against Iraq. In 2003, Gun worked as a translator of Mandarin for Britain’s GCHQ intelligence agency when she was copied into a classified memo sent by a senior figure in the US National Security Agency. Washington requested London's help to find information on UN delegates that could then be used to pressure them into authorising a US invasion of Iraq. Gun sent the information to a friend, who passed it on to a British journalist.

The whistleblower owned up to the leak after the story was published in the Observer on the front page. The revelation caused a political storm. Gun was subsequently charged with breaching the Official Secrets Act, but the government decided not to prosecute her.

There were several attempts to make a movie about the events of the time, but due to various reasons they all failed. Gun was hesitant to get involved in a film directed by Gavin Hood, but after spending several days talking to the director, she agreed.

"I think it raises interesting questions about loyalty, to what and to whom do we owe our loyalty", said director Gavin Hood. Gun argues that the fact that Bush and Blair were not held to account sets “an extremely bad example” for politicians in the UK and US.

In 2003, the United States and Britain invaded Iraq under the pretext that Baghdad possessed weapons of mass destruction. The campaign resulted in the deaths of hundreds of thousands of Iraqi citizens and led to the destabilisation of the country and the Middle East, with some observers saying that the invasion led to the emergence of the Islamic State terrorist group.

A public inquiry conducted by Sir John Chilcot concluded that Saddam Hussein’s Iraq did not pose an imminent threat and that the policy towards the country was based on flawed intelligence.