Ex-Ecuador President Correa: 'Lenin Moreno’s Government is Over, He is a Puppet of Lobbying Groups' 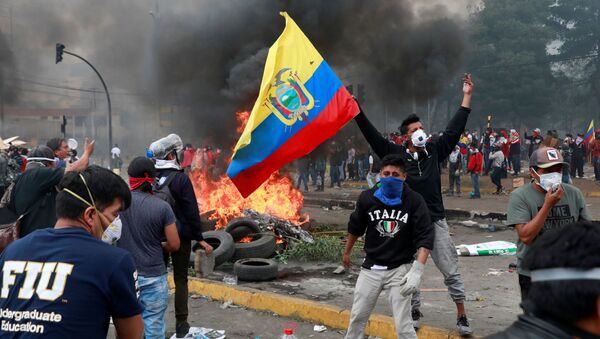 Former Ecuadorian President Rafael Correa has shared with Sputnik his impressions of events taking place in Ecuador, where people have taken to the streets to express their anger with the economic policies of President Lenín Moreno, who, in turn, has accused Correa of inciting the masses to riot.

Sputnik: There is an information war, and among other rumours, they say that you are going to Ecuador. Is that true?

Rafael Correa: No. I do not think that there is an information war, everything is very clear. What really exists is the “wall” of the Ecuadorian press, which has obscenely been supporting Lenin Moreno for these two and a half years, so much that people on the streets react negatively to the journalists from Teleamazonas, Ecuavisa, El Universo, El Comercio. They do not want to learn anything from this press but prefer to receive information from small radio stations, from the alternative press, from the regional press.

The hegemonic press was Moreno's greatest accomplice, it was linked with him; it is part of the government so much that, for example, the son of the Diario Expreso owner is the Minister of Transportation. This government abolished the Communications Law, stripped it of content and left only the framework. To hide the mistakes and horrors of this government and brutal repressions there exists this wall – manipulation and complicity of the media. We have an immature democracy, which is still surprised by such things.

Sputnik: On Wednesday, the march in Quito was brutally suppressed.

Rafael Correa: Since the last years of the military dictatorship, I have not seen such cruel persecution, with curfews, the abolition of constitutional guarantees and physical repression: beating protesters, dispersing demonstrations where there are women and children, using tear gas... We already have several dead, hundreds wounded and more than 700 detained.

Sputnik: The situation in the government is very difficult. What solutions do you think are possible?

The thing is that people can no longer tolerate this. With his help, the elite has regained power based on fraud and treachery. What way out do I see? If he remains in office, he will become a bigger nobody even more than today. He is currently in talks with the leaders of the Confederation of Indigenous Nationalities of Ecuador (CONAIE) and the United Workers’ Front (Spanish acronym FUT) – two organisations whose leaders until recently supported Moreno – but now even they have rebelled against him.

One option is to reverse the measures taken on diesel fuel (Moreno cancelled state subsidies for fuel and prices for the population spiked – ed. note). In this case, I think, the government will be as dead as it gets. But the CONAIE leaders must achieve something. I think that they should agree with the IMF on some kind of concession so that everyone is happy. Everyone has stood up against Correa.

But the government is already in a state of clinical death, in a vegetative state. Hegemonic media, business, financial power, the military, the police, and part of the Church continue to support it. Our democracy is made of playdough: they control all the real branches of government, including the state institutions that they have taken over, for example, the Electoral Commission, to prevent me from participating in free elections. Nevertheless, I am being optimistic. I believe that we will win.

Sputnik: As an economist, do you think that in Ecuador’s case it was necessary to turn to the IMF again?

Rafael Correa: In the ten years of my tenure, we didn't see a single IMF mission, and we never had such a prosperous decade as from 2007 to 2017, the decade of the Citizens' Revolution. And this is not the IMF to blame for it but those who obey it. This is part of their discourse: making people believe that everything is really bad and that without them the economy will collapse. They do this so that people remain passive. But you can only keep deceiving like this for six months or a year.

In 2017, the economy grew, in 2018 it grew more slowly, and in 2019 it began to decline. There was no crisis, there was no excessive debt, the deficit was at 5% level, well managed; however, we must not forget that in 2016 there was an earthquake that cost us 3 points of GDP, and we had to get into debt to recover. During my government, debt increased from $13 billion to $27 billion but we invested $100 billion. This means that as a country we have become $86 billion richer. You can tell that by the beautiful highways, hydroelectric power stations, new police stations, schools, medical centres, and bridges.

In two years, Moreno owed $15 billion to the external sector and made no investments. They shot themselves in the foot. Taxes and tariffs have been reduced, which entails very serious tax and external consequences. An exchange rate that could be adjusted does not exist. We have lost $600 million in tax revenue.

The Ecuadorian Social Security Institute (Instituto Ecuatoriano de Seguridad Social, IESS), with such excess liquidity, is restricted from financing the government. All this is ideological fundamentalism. This money is going abroad. They also prohibited the central bank to lend to the government. They banned domestic sources of financing, and all that remained was to obey the IMF, to do such stupid things as removing subsidies so that the country earns $1.3 billion. The removal of subsidies does not give wealth. The state receives $1.3 billion, but not a single citizen receives $1.3 billion. They themselves created a crisis.

Sputnik: There is a specific prosecution model for former Brazilian President Lula, Ecuador's former Vice President Jorge Glas, Argentina's former President Cristina Fernandez de Kirchner, and you. Does it fit the overall strategy or is it a coincidence?

Rafael Correa: The cases of Ecuador and Argentina are very similar. However, there is a big difference. Argentina’s President Macri is a right-wing man; people knew what they were voting for. Moreno, on the other hand, presented himself as a leftist, as the successor to the Citizens' Revolution. We won the election, and then he did the opposite. He threw the government programme into the trash bin and accepted the plan of the defeated candidate. This does not happen in a democracy but anything can happen in Latin America, especially with the complicity of the government. It is spectacular how he betrayed absolutely everything. This is an anthology of cynicism. No one can lie this much.

Of course, this is part of the strategy for the return of neoliberalism. In the 1990s, people did not quite understand what was being discussed, and there wasn't so much resistance. Now we have come out of the successful progressive governments of 2002-2014, the golden age of Latin America. Some 900 million Latin Americans emerged from poverty, we significantly reduced inequality, and we have grown while Europe and the US were in a recession. They looked at us with admiration all over the world.

These conservative movements came having strength, unlimited resources, clearly articulated speeches, strategy, and they are backed by the United States, which sought to neutralise left-wing leaders so that they would not think about coming back. They cannot defeat us in democratic elections; this is a "lawfare" – the persecution and prosecution of politicians. There are two aspects: lynching and co-optation of the judiciary through media and political pressure. Judges, dying of fear, wait for the headlines to copy their judgements and not be lynched.

The elected vice president of the Moreno government (Jorge Glas) – since he was an obstacle to what they wanted to do and they already knew what they wanted to do – has been the victim of a conspiracy since the campaign, to get him out of the way. They linked him with the Odebrecht case on false testimony, with fake evidence, and overnight approved precautionary measures prohibiting him from leaving the country. Lulu is being held in a military barracks. Jorge Glas served as vice president and now is in an ordinary prison, where he has been threatened with death 30 times. The best way to counter this law is to change the political situation because it will change the judicial situation of the persecuted leaders.

Sputnik: You were one of the first to talk about a conservative reaction. Do you think this wave is ending and changes are beginning to take place in the region?

Rafael Correa: Certainly. Now we cannot stop there. Mandatory Primary Elections in Argentina (PASO) were overwhelming. Exit polls favour Evo [Morales in Bolivia], but if there is a second round, it will be hard. We must work as if we have no voice of supporters. In Uruguay, it is more difficult. The cycle is shortened. I am partly sceptical of cycles. When neoliberalism came about in the late 1980s, it stayed with us until the turn of the century and was leaving calamity after calamity in its wake. We had a long and grave neoliberal night.

Now its life is about to expire in two to three years. If the elections were free and allowed me to run for president, I assure you without any vanity that we would win in one round. That's why they persecute me every day. If Lula had not been in prison, he would have been the president and not this fascist Bolsonaro. Having imprisoned Lula [da Silva], not only freedom but also democracy was stolen from Brazil. We see that this conservative reaction has outlived itself faster than it began. Our nations have experience.

Sputnik: Progressive governments made mistakes. If you had to think about yours, which ones would you point out?

Rafael Correa: If we have 10 years of rule, how can we not make mistakes? I can list you in chronological and alphabetical order but we were never mistaken with the side, we were always with the majority. We doubled the size of the economy, we had one point of growth more than the average for Latin America, and we were the regional champions of poverty eradication. We had the worst infrastructure on the continent. Today, Colombia is jealous of our roads. There will always be a traitor and a kleptocrat, but we are humans, not parapsychologists. Mistakes were made but the biggest success is that we were on the right side.

Sputnik: Many Argentinians are disappointed that they are losing rights they considered guaranteed.

Rafael Correa: I also believed that what we created had a more solid foundation. This is one of my biggest disappointments. The destruction over two and a half years has been terrible. How is that possible? It is called the press. Moreno was found to have an offshore bank account in Panama. And they do not open it. They checked everything with me and could not find anything. They make an honest hero out of a corrupt villain.

In a state governed by the rule of law, there must be reliable information. If information is manipulated instead, the media deprives us of democracy. That's why we regressed so much, people were deceived. Since we can’t find a way out of the evils of underdevelopment, we do not have adequate collective actions, we do not have a good education, and we have no talent or critical capabilities. And they keep telling us all nonsense, and we continue to believe in it. For example, they say that Correa is in Barquisimeto destabilising the country by stealing $35 billion. Manipulation is a major factor.

Rafael Correa: Every time I say “press”, I mean hegemonic press. The exception is alternative media in Ecuador.