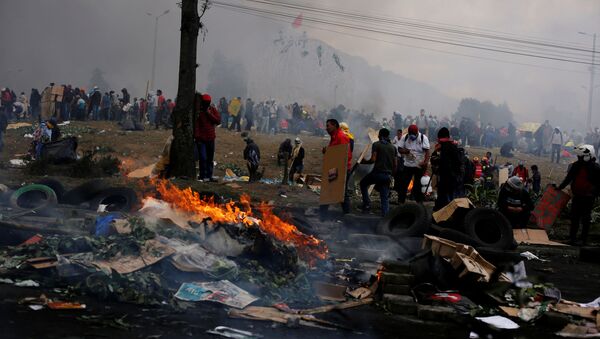 Late on Saturday, Ecuador's President Lenin Moreno pledged to assess a decree that had ended fuel subsidies and to study the consequences of the controversial bill more closely to ensure the law could benefit local communities.

"Obscure forces, linked to organised political delinquency and led by Correa and Maduro, with the complicity of narco-terrorism, criminal gangs, violent foreign citizens, have caused violence never seen before", Moreno said during a televised statement.

On Saturday, the command of the Ecuadorian Armed Forces imposed restrictions on people’s movement in “strategically important areas” across the country after Moreno imposed a curfew in the capital of Quito and its outskirts.

Mass protests erupted in Ecuador in early October as thousands rallied across the country against the government's economic reforms, particularly, the decision to end decades-long fuel subsidies for people.

According to Moreno, Ecuador could no longer afford them and the cuts could help the country save some $2.27 billion a year. Additionally, the abolition of fuel subsidies was part of the Ecuadorian government's deal with the International Monetary Fund to be eligible for a $4.2 billion loan.