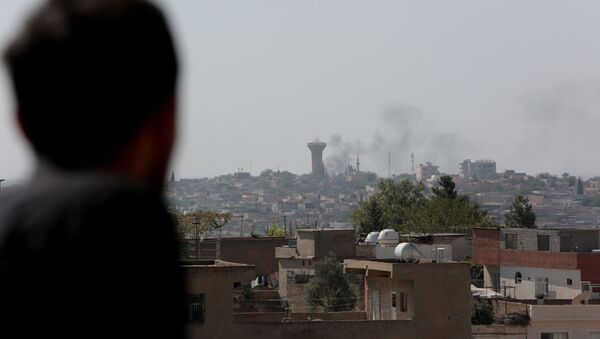 Turkish troops continue to advance deep into northern Syria after launching a ground offensive, known as Operation Peace Spring, the Turkish Defence Ministry said on Thursday. How will Damascus and its allies respond? How far can Turkish troops reach?

Member of the Syrian Parliament Husein Ragib shared his view on the situation and told Sputnik that the Syrian government could and had the right to use all possible means to repel the Turkish invasion:

“Turkey’s actions are occupation and aggression. Therefore, Syria has every legitimate reason to defend itself both diplomatically and by military means. This is indicated by Article 51 of the UN Charter on self-defence,” said the Syrian deputy.

Ragib elaborated on the legal procedure in terms of international law and agreements for such a scenario. According to him, the response of the Syrian government will be diplomatic through the guarantor countries, according to the Astana Talks, through the Security Council and the UN because Turkey’s military operation is aggression that threatens international security and peace under Article 39 of the UN Charter.

“We are ready to fight. Thousands of young men from various parts of Syrian society can repel this aggression. The Syrian army is also ready for battle,” Raqib concluded.

Another Syrian MP Khalil Taamah told Sputnik that it was impossible to predict the further development of the situation:

“Syria is not alone in the face of the Turkish invasion: there is coordination with the allies to observe common interests. It is impossible to say how the situation will unfold. We have to wait,” said Khalil Taamah.

The Syrian deputy stressed that while Turkey has held lengthy negotiations with Russia and Iran, he believes Syria will continue to make its presence felt:

“Turkey has big ambitions in northern Syria. But they are not stupid to believe that they will linger for a long time in those areas that they are currently occupying.”

Stanislav Tarasov, an expert on the problems of the countries of the Middle East and the Caucasus, also spoke of the impossibility of predicting further developments. According to him, the situation is developing in an unpredictable way. The Turks tried to negotiate with the Americans but did not succeed, and as a result, they opted to go it alone:

“Turkey faces the threat of violating the integrity of its territory due to the creation of a Kurdish enclave in the east of the Euphrates. It is forced in desperation to carry out this operation in Syria. These are sensitive points and everyone understands this. That’s why Moscow calls for all agreements reached to be respected,” the Russian expert noted.

No more than a month

Director of the Institute of Modern State Development Dmitry Solonnikov told Sputnik that the Turkish operation was designed more to have a short-term impact, without the goal of destroying all Kurds. However, he believes that the Turks have come to punish the Kurds, who threaten the security of southern Turkey:

“The Kurds will be pushed away from the Turkish borders and everything will end. Therefore, it will be a short-term operation within a month,” the expert said.

History shows that similar situations have already taken place in modern times and there is nothing to be surprised at:

“The same thing happened in Iraq and Syria. A zone is being created several kilometres along the Turkish border, which should ensure security for the state. No one is going to destroy the Kurdish army,” Solonnikov concluded.

Turkish President Recep Tayyip Erdogan will have a hard time but the game is worth the candle, he believes.

Grigory Lukyanov, an expert in Middle East politics at Moscow’s Higher School of Economics, believes that this will not be an easy walk for Turkish troops, first of all because the Kurdish forces are numerous, well-armed with American weapons, and receive US intelligence help and they are going to be fighting in a prepared territory.

Nevertheless, given the external and internal political environment, the expert believes that Erdogan could not have a better time for taking action:

“Erdogan now has a good political situation for the operation. He has opened a window of opportunity due to domestic political reasons and by establishing a dialogue with Damascus. Now there is less chance that he will be stopped”.

"Last time, President Erdogan’s advance through Syria was stopped by surgical strikes of the Russian Aerospace Forces. Today he has a chance to seize the opportunity. Even if the security corridor is going to be less than declared, still Erdogan is likely to prove himself a politician who keeps his word to Turkey’s citizens," Lukyanov added.

In an interview with Sputnik, the minister noted that the Arab world has to show pan-Arab solidarity to confront Turkish aggression in northeastern Syria at the political and economic levels. He clearly stated that Turkey must not be allowed to conduct ethnic cleansing and force Syrians to become refugees, noting that it was Turkey from the very beginning who contributed to the looting of Syria:

“We condemn this Turkish aggression and urge our Kurdish brothers to work with the Syrian government to protect the Arab world. This is not the first time we have observed Turkish aggression in Arab territory. Each time, Ankara tries to conduct ethnic cleansing to gain a foothold in our lands. Now Turkey has laid eyes on Aleppo. Unfortunately, we will still see new flows of refugees that will appear after the Turkish “creation of the buffer zone,” which is created under the pretext of protecting the Turkish border,” Hassan Murad said.

“The first reaction should be the decision of the Arab League to return Syria to its structure to support it both politically and financially. We need to unite and break Turkey’s desire to divide the Arab countries,” the Lebanese minister concluded.

The Arab League Council will convene on Saturday 12 October at the level of Foreign Ministers, for an emergency meeting to discuss the situation around the Turkish military operation in Syria, according to the League of Arab States.

The Turkish Air Force launched Wednesday’s military action against Kurdish forces, with airstrikes on the city of Ras al-Ayn in al-Hasakah Governorate in north-eastern Syria. The same day, another Syrian city on the border with Turkey, Tell Abiad, was hit by Turkish aircraft. Several Arab countries have sharply condemned the Turkish action.