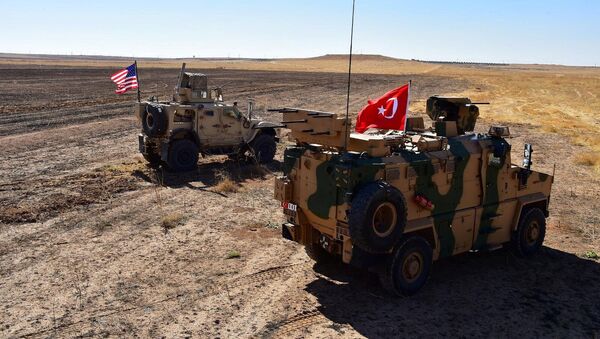 Ankara is fighting US-backed Kurdish forces in Syria, claiming they are affiliated with the Kurdistan Workers' Party (PKK), blacklisted by Turkey as a terror group.

Ankara launched "Operation Peace Spring" on Wednesday in order to battle against predominantly-Kurdish Syrian Democratic Forces (SDF) and Daesh to create a so-called safe zone in the region.

The operation has been condemned by the EU, while Washington, which supports the Kurdish militia, has warned that Turkey might be sanctioned because of the step.

President Recep Tayyip Erdogan, however, stressed that Ankara is not afraid of threats, "no matter what anyone says" and won't stop the offensive, while Turkish Foreign Minister Mevlüt Çavuşoğlu stated the operation had been launched under Article 51 of the UN Charter and UN Security Council Resolutions regarding the fight against terrorism.