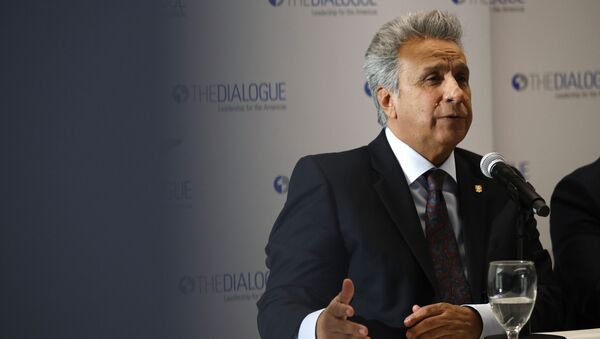 QUITO (Sputnik) - Ecuadorian President Lenin Moreno called on leaders of indigenous communities, involved in the ongoing protests against his economic policies to discuss a decree that has sparked the unrest.

"I am calling on the leaders to engage in a direct dialogue with me. Let us sit down, discuss decree No. 883 and discuss where the funds should be allocated", Moreno said live on state-run television on Friday.

Executive Decree No. 883 scrapping fuel subsidies was issued on 1 October and was met with outrage from the transport industry workers. They were subsequently joined by the wider public opposing the planned austerity measures. The indigenous groups became at the forefront of the unrest.

Earlier this week, the Confederation of Indigenous Nationalities of Ecuador sent a letter to the government, demanding the withdrawal of decree No. 833 as one of the conditions for a dialogue.

Moreno's economic measures are part of Ecuador's aid deal with the International Monetary Fund. The unrest rocking the country has prompted the president to declare a state of emergency. According to a presidential decree, a 60-day state of emergency will allow the government to mobilize security forces and invoke extraordinary measures to address the unrest.