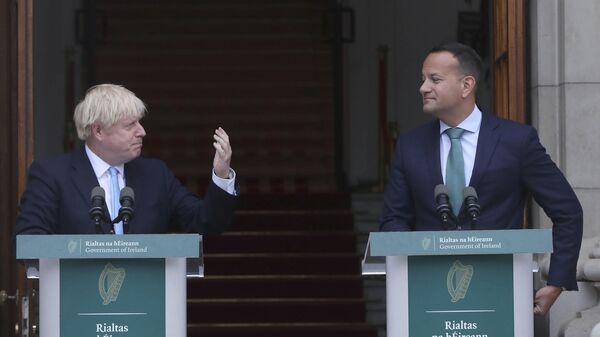 As talks between the UK and the EU have taken a sudden and surprisingly turn in favour of the possibility of a deal, Boris Johnson has one obstacle to overcome: convincing allies in Northern Ireland to get in line with any agreement, even if it keeps them locked in current EU customs arrangements.

Unionists have pledged to stop any Brexit deal that keeps Northern Ireland in the EU Customs Union, amidst reports that Boris Johnson is preparing to do precisely that in order to secure a Brexit deal with Brussels.

The Prime Minister has so far refused to say what concessions he has offered the EU in recent negotiations, with talks expecting to intensify next week, saying only that he has offered “nothing that will damage the ability of the whole of the UK to take full advantage of Brexit.”

However, EU sources have been widely quoted as saying that Mr Johnson had suggested that there could not be a customs border between Northern Ireland and the Republic of Ireland - a sudden departure from his previous position.

Yet, as speculation began to mount that Mr Johnson might be giving way on customs arrangements to avoid a hard Irish border, the leader of the Democratic Unionist Party (DUP) that is in coalition with the ruling Conservatives issued a statement saying that, “the United Kingdom must leave the EU as one nation and in so doing that no barriers to trade are erected within the UK.”

“We have been consistent in our opposition to the backstop, whether UK or Northern Ireland only. Anything that traps Northern Ireland in the European Union, whether single market or customs union, as the rest of the United Kingdom leaves will not have our support. The Prime Minister is very mindful of that,” DUP leader Arlene Foster has been quoted by the Belfast Telegraph as saying.

Ian Paisley Jr has said that if the DUP does not like the #Brexit deal the UK may get with the EU, the party will vote it down in Westminster | https://t.co/biolmPXU5d pic.twitter.com/8rFbazqyvd

​Without the supporting votes of DUP MPs in Westminster, Mr Johnson’s Brexit deal will not be able to pass in parliament, therefore securing their support is vital to him.

The UK is to enter crunch negotiations with the EU next week after an agreement was made on Friday October 11 to intensify talks. Officials in Brussels have said that discussions will be entering a “tunnel” phase where public disclosure of details will be kept to a minimum.

A European Commission spokesperson has been quoted as saying that, “the EU and UK have agreed to intensify discussions over the coming days. The EU’s position remains the same: there must be a legally operative solution in the withdrawal agreement that avoids a hard border on the island of Ireland, protects the all-island economy and the Good Friday [Belfast] Agreement in all its dimensions, and safeguards the integrity of the single market.”

Optimism suddenly emerged on Thursday October 10 after Boris Johnson met with the Irish Taoiseach Leo Varadkar, after which both said that they could see a “pathway to a deal.”

Despite such news, EU sources have been cited as saying that there is not enough time to hash out the details of any new divorce bill, with some reportedly suggesting that for a deal to happen, there would need to be a new extension beyond the October 31 deadline - something the UK parliament has not shown signs that it is willing to accept.

Moreover, European Council President Donald Tusk on Friday poured cold water on hopes of an imminent deal, saying that “time was practically up” and that there is “no guarantee” of success.

“Unfortunately we are still in a situation in which the UK has not come forward with a workable realistic proposal,” he added.

Yet, in a faint glimmer of hope for those wanting to secure a deal, Mr Tusk went on to say that “even the slightest chance must be used.”