Turkey to NATO: We Expect Solidarity From Our Allies on Northern Syria Operation 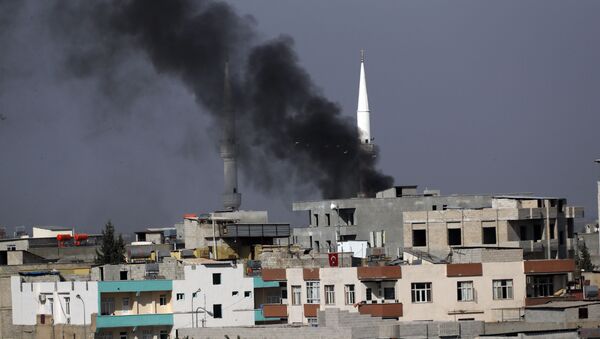 Egor Efimchik
All materials
The Turkish military is currently conducting a military operation in northern Syria — its third in three years — with a stated goal of clearing the way for the return of millions of Syrian refugees and addressing the alleged security threat near its southern border.

"We gave information about the operation to the secretary general and we re-emphasize our expectation for strong solidarity from our allies," Mevlut Cavusoglu told a joint press conference with Stoltenberg.

The NATO chief, for his part, said he had expressed "serious concerns" about the operation, now in its third day, which risked "further destabilising the region".

What's going on in Syria?

Turkey launched the offensive, code-named Operation Peace Spring, on Wednesday against what it calls terrorists based in northeastern Syria, south of its border.

The area is de facto controlled by the SDF, a formerly US-backed alliance of militias led by the People's Protection Units (YPG), a mainly-Kurdish militant group. Turkey believes the YPG to be tightly allied with the Kurdistan Workers' Party, or PKK, an outlawed organisation pushing for the greater autonomy of a united Kurdistan.

Infighting has broken out between Turkish and Kurdish forces as the former are pushing deeper into the Kurdish-held territory following aerial and artillery attacks. Turkey reported that it had killed 277 "PKK-YPG terrorists" so far and had its first military fatality today.

What is Turkey's motivation?

Ankara wants to drive the Kurdish "terrorists" away from the area to establish a weapons-free buffer zone there for it to accommodate 2 million Syrian refugees out of the nearly 3.6 million currently living in Turkey. The Damascus government, which doesn't control the region but legitimately sees it as part of Syrian territory, considers the "safe zone" project to be a direct violation of its sovereignty.

Since 2016, Ankara has carried out two major anti-terror military operations in Syria that targeted both Daesh* terrorists and Kurdish-led forces. The military efforts were mainly focused on eliminating the latter.

How did the world react?

The current operation was made possible after the United States — a key ally of the YPG — effectively endorsed it by withdrawing its forces from the area. US President Donald Trump initially appeared measured in his criticism of the incursion, calling it a "bad idea", but a group of Republicans in Congress have launch a motion that would impose sanctions on Ankara.

Several EU member states have criticised the op and urged Turkey to stop it. Norway (its NATO ally) and Finland have suspended arms sales to the Erdogan government. Russia and Iran, both major players in the region, asked Turkey to act with restraint and respect the sovereignty of Syria.

*A terror group outlawed by Russia, the US, the United Nations, and many other countries.