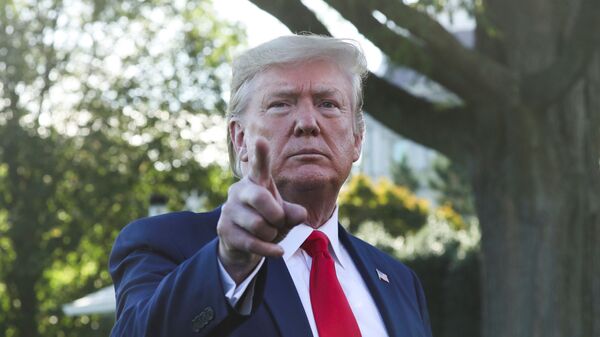 Ilya Tsukanov
All materialsWrite to the author
President Trump has called Turkey's operation against Kurdish forces in northern Syria a "bad idea," and said that in addition to possible sanctions, he would like to see something "much tougher" done against Ankara. Earlier, a group of senators said they were working on a package of "deep and devastating" "sanctions from hell" against Turkey.

President Trump will be signing an executive order giving US officials new powers to target Turkey and its government officials with "very significant sanctions," Treasury Secretary Steven Mnuchin has announced.

Speaking to reporters on Friday, the official clarified that the "very significant" powers to sanction Turkey had been authorised, but not yet activated.

"I just met with president Trump, and he has authorised and will be signing a new executive order giving the treasury department, in consultation with himself and Secretary [of State Mike] Pompeo, very significant new sanctions authorities that can be targeted at any person associated with the government of Turkey, any portion of the government," Mnuchin said. "This will be both primary sanctions and secondary sanctions that will be applicable."

Mnuchin warned that the US would be able to "shut down" Turkey's economy if necessary amid Ankara's ongoing campaign against US-allied Syrian Kurdish forces in northern Syria.

"The president is concerned about the ongoing military offensive and potential targeting of civilians, civilian infrastructure, ethnic or religious minorities. Also, the president wants to make very clear that Turkey not allow even a single ISIS [Daesh] fighter to escape," the secretary stressed.

On Thursday, lawmakers in the House of Representatives announced that they would support efforts by the Senate to impose sanctions on Turkey, with House Republican Conference chairwoman Liz Cheney saying "President [Recep Tayyip] Erdogan and his regime must face serious consequences" for the attack against Washington's Syrian Kurdish allies.

Also on Thursday, President Trump told reporters that he was considering doing "something very, very tough with respect to sanctions and other things" over Turkey's Syria operation.

Turkish Foreign Minister Mevlut Cavusoglu later responded to Trump's string of statements and tweets on the Turkish operation in Syria, saying Washington would not be able to change Ankara's policy. On Friday, the foreign minister blamed the US for the Syria crisis, saying Ankara was forced to start its operations in part due to the supply of US arms supplies to the Kurds.

Turkey launched its new Syria campaign, dubbed 'Operation Peace Spring', on Wednesday, saying its aim was to clear the border area of Kurdish militants and Daesh (ISIS)* terrorists and to establish a security zone. Turkey has repeatedly clashed with Syrian Kurdish forces during the long war in Syria, and classifies the YPG People's Protection Units as 'terrorists', accusing them of having links with the Kurdistan Workers' Party, a Turkish Kurdish militia and political movement which has been waging a guerilla campaign against the Turkish state for decades.

On Friday, Russian President Vladimir Putin said Moscow and other countries in the former Soviet space were concerned with the "real threat" potentially posed by the escape of Daesh fighters currently being held in Syrian Kurdish-controlled areas. "I'm not sure if the Turkish army can quickly take control of it," he said, speaking at a Commonwealth of Independent States summit in Ashgabat, Turkmenistan. Putin and Erdogan held telephone talks on Wednesday, with the Russian president reportedly urging Ankara to assess the situation and to not harm the efforts to settle the crisis in Syria.

On Thursday, Iran, another co-guarantor of the Syrian peace process, called on Turkey to halt its offensive immediately and to pull out of Syria.

Damascus has repeatedly called on all uninvited forces operating in Syria to withdraw immediately, and accused Turkey of "aggressive intentions" and a "disgraceful breach of international law and UN resolutions that respect Syria's sovereignty and territorial integrity" with its norther Syria operation.