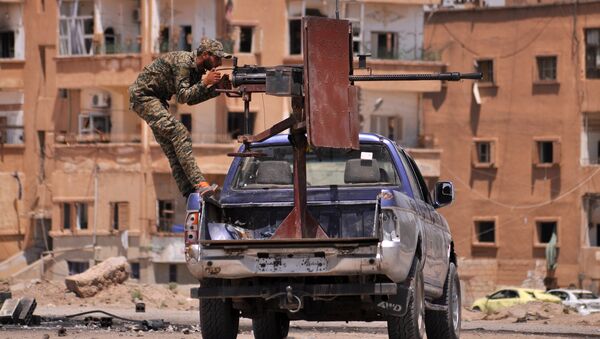 WASHINGTON (Sputnik) - Syria’s Kurds now have no alternative to working with President Bashar Assad’s government since Turkish forces launched an operation in the northern portion of the country, former US Ambassador to Saudi Arabia Chas Freeman said.

"The Assad government has won the Syrian civil war," Freeman, former US Assistant Secretary of Defense for International Security Policy, said. "Assad's foes must now make peace with him. Syria's Kurds now have no alternative to doing so."

However, Freeman also said Turkey would not be able to avoid working with Damascus, Moscow, and Tehran to ensure that its security interests were taken into account as Syria reunifies and refugees now on Turkish soil are repatriated to the "safe zone" in Syria it is attempting to create.

"The US presence in the Kurdish areas of Syria has been both illegal and an anomaly that damaged rather than served American interests," the former ambassador added.

The Kurdistan People’s Party (PKK) was responsible for terrorist acts that have caused the deaths over the years of more than 40,000 Turkish citizens, Freeman pointed out. Meanwhile, the People’s Protection Units (YPG) never ceased being a PKK proxy despite partnering with the Americans against Daesh*.

Turkey has consistently declared that, at the appropriate time, it would act to eliminate the threat that a PKK-affiliated statelet on its borders would pose to its security and domestic tranquillity, Freeman noted.

"The fact that it is now doing so - expelling the YPG as well as the Islamic State from northeastern Syria - should come as no surprise," he said. "Americans should never have ignored [Turkey’s] national security interests in the first place."

Freeman claimed that it has long been obvious that Washington’s latest flirtation with the Kurds "would end in tragedy for them."

"Trump, like several of his predecessors in both the last and this century, has turned his back on a previously favoured Kurdish faction after the US intelligence and military establishments had irresponsibly led them to expect support for their interest in self-determination," Freeman said.

Freeman applauded Trump for rectifying the Obama administration’s mistake of allying the United States "with a clearly avowed enemy of Turkey." However, Trump’s execution of the policy shift had been implemented abruptly without staffing or diplomatic preparation, the former envoy observed.

"As with so many of Trump's foreign policy actions, it is less what he did than the singularly ungraceful way in which he did it that raises questions," he said.

That poor execution in unveiling the new policy had magnified the political costs to Trump and ensured that there would be unnecessary damage to the reputation of the United States, Freeman admitted.

"A more competent leader would have minimized these consequences by linking his decision to a process that would help Syrians of all ethnicities restore peace to their country. At the moment, the available process for doing this is the Syrian Constitutional Committee," he said.

Turkey said it launched a military operation in northern Syria on Wednesday to clear the border of Kurdish militants and Daesh. The move came after President Donald Trump ordered the removal of some 1,000 US troops from northern Syria, however, State Department officials on Thursday said Washington never intended for this to be a "green light" for a Turkish offensive.

The Syrian government has condemned the Turkish offensive in northern Syria as an act of aggression, and this sentiment has since been echoed by Russia, and a number of Arab and Western nations.