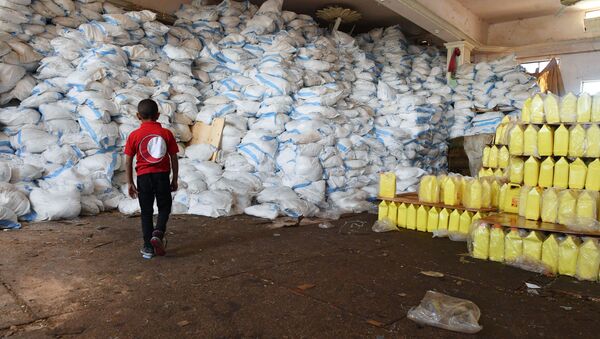 © Sputnik / Mikhail Voskresenskiy
Subscribe
At the same time, the Swedish cabinet minister who initiated the extra aid,emphasised that it should not be seen taking a stance against Turkey.

The initiative comes from Minister for International Development Cooperation Peter Eriksson of the Green Party.

“There are major humanitarian needs in the refugee camps from before. Now, after what has happened, there are even more refugees and even greater need for basic things like food, water and roof over their heads” Peter Eriksson explained to Swedish Radio.

The money will be channelled via the Swedish International Development Cooperation Agency (SIDA), a government agency under the Foreign Ministry, “as soon as possible”, Peter Eriksson said.

According to Eriksson, the money will be funnelled to the UN Refugee Agency (UNHCR), the UN Office for the Coordination of Humanitarian Affairs (OCHA), as well as other civilian organisations working with humanitarian efforts.

At the same time, Eriksson assured that the extra $10 million tranche is not taking a political stance against Turkey's recently-launched operation in northeastern Syria.

“No, we have been working for seven years, since the war started in Syria, trying to help both in neighbouring countries and in Syria itself. Now we see that the problems are about to be exacerbated further,” Peter Eriksson said.

According to Swedish Radio, the decision will be formally passed next week.

Meanwhile, Andrei Engstrand-Neascu, the head of the Swedish Red Cross for the region, described the humanitarian situation ithere as “extremely serious” and “complicated”. According to him, close to 1.7 million people in the area are already in need of humanitarian aid. He stressed that while the Red Cross and its sister organisations maintain a strong presence in the region, they will need more money and more supplies.

At the same time, journalist Patrik Paulov, the author of the book “Syria's Silenced Voices”, called to review the support of Syria.

“In several other European countries, the silence is broken as to how aid has benefited terrorists in Syria. But in Swedish media and among our politicians there is silence”, Paulov wrote in his recent opinion piece in Svenska Dagbladet.

In 2018, Syria was one of the top receivers of Swedish aid via SIDA at almost SEK 630 million ($63 million), trailing Afghanistan, Tanzania and Somalia.

Earlier this week, Turkish President Recep Tayyip Erdogan announced the beginning of a military operation in northeastern Syria. He described the offensive as aimed at ousting Kurdish militants from the border area and setting up a safe zone where Syrian refugees could be accommodated.

So far, Turkey claimed to have killed 342 “terrorists”. On the other hand, at least one Turkish soldier has been killed during the offensive dubbed Operation Peace Spring.

While this move triggered the condemnation of various countries, Recep Tayyip Erdogan responded that he could “open the door” to Europe for 3.6 million Syrian refugees, currently in Turkey, should European countries label Turkey's military operation as an occupation.

000000
Popular comments
Open the gates Erd and let them loose in EU. This will be the Karma they deserve for blindly following the US on its wild excursions and creating all the chaos in the region. Vassals will be vassals.