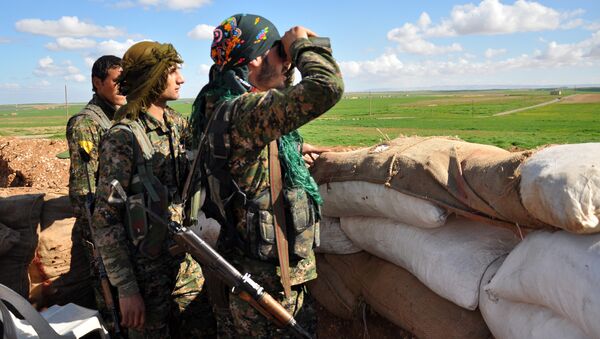 Ekaterina Blinova
All materialsWrite to the author
The Turkish offensive against northeast Syria, denounced by Damascus as a violation of the country's sovereignty, has left little if any chances for Kurdish resistance, say international observers weighing up the pros and cons of the Ankara-proposed "safe zone" in the north of Syria.

On 9 October, Ankara launched Operation Peace Spring against areas held by the self-proclaimed Autonomous Administration of North and East Syria (NES), also known as Rojava, amid a partial US withdrawal out of the path of the Turkish Armed Forces.

​The region, located to the east of the Euphrates River along the Turkish border and borders Iraqi Kurdistan to the southeast, is being held by the Syrian Democratic Forces (SDF). This group of Kurdish-dominated and formerly US-funded militias is led by the People's Protection Units (YPG), which presented in the Turkish media and by President Erdogan as being an offshoot of the Kurdistan Workers' Party (PKK), outlawed as a terrorist organisation in Turkey. Ankara has repeatedly stated that it won't tolerate a potentially hostile autonomous entity in Turkey's underbelly.

"The objective of our operation is to avoid the establishment of a terror state in the south [of Turkey]. That’s what we are working for," Turkish President Recep Tayyip Erdogan stated Thursday at a meeting of his Justice and Development Party (AKP).

According to Ergogan's plan, Turkey is going to create a "safe zone" stretching from the Manbij area to the Iraqi border, where Syrian refugees will be resettled once the operation is completed.

While Damascus does not recognise the Kurdish self-proclaimed autonomous region in the north, the Syrian leadership denounced Ankara's operation as a violation of the Republic's sovereignty. Iran and a number of European countries have also condemned the Turkish military operation. For its part, Russia has called upon the Turkish leadership to respect the territorial integrity of Syria. 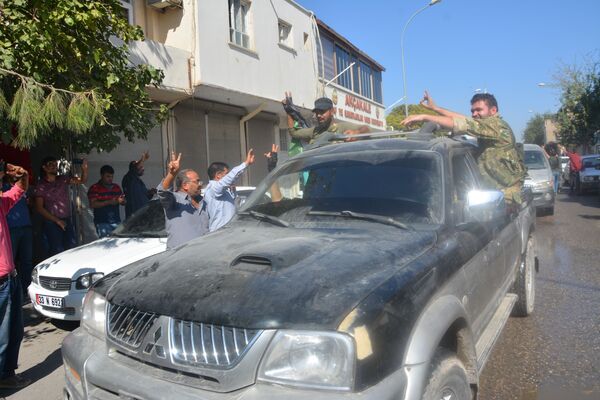 Syrian Kurds Had to Stay Under the Banner of Damascus

Christopher Assad, a Canada-based political analyst of Syrian descent, emphasises that neither the American nor the Turkish presence in the region have any legitimate grounds.

"Walid Muallem, Syria’s deputy prime minister and minister of foreign affairs made it clear at the UNGA74 that any and all foreign troops who are present on Syrian territory without consent from the Syrian state are considered occupation forces and will be dealt with accordingly", Assad says. "I believe that this statement would soon be clarified to the dream weavers in Ankara and Washington relatively soon."

According to him, Washington’s presence east of the Euphrates "has always been technically unsustainable". The question arises as to what exact mission the US has been accomplishing in the region apart from "guarding" and training Kurdish and Arab fighters.

"Now that all the pieces are in place for a confrontation between Turkey and the SDF, the strategic objective of the US/Israeli agenda has been given relative reprieve because the same was about to be defeated by the Syrian Arab Army (SAA) which as a consequence, would have prevented the prolongation of the war on Syria," the political analyst suggests.

During the first two days of the Turkish offensive, the US-backed Kurdish fighters were largely outgunned by NATO's second-largest military force.

Citing YPG sources, Reuters reported Thursday that the militiamen do not have heavy weapons to resist the advance of Turkish aircraft or tanks.

According to Assad, there is little if any chance that "the SDF [will] relinquish its newfound power in Northern Syria by joining the ranks of the SAA" which means that "peace in the North will prove to be elusive".

Ghassan Kadi, a political commentator and blogger of Syrian origin, agrees that it won't be easy to avoid a Kurdish bloodbath.

"Sadly, it seems inevitable and I have been warning that unless the Kurdish issue is dealt with properly, then history is likely to repeat itself, and historically, Kurds have almost always paid for the price of settlements and were invariably let down and abandoned by their foreign supporters. This is why Syrian Kurds ought to stay under the banner of Damascus as I have been saying", Kadi stresses. 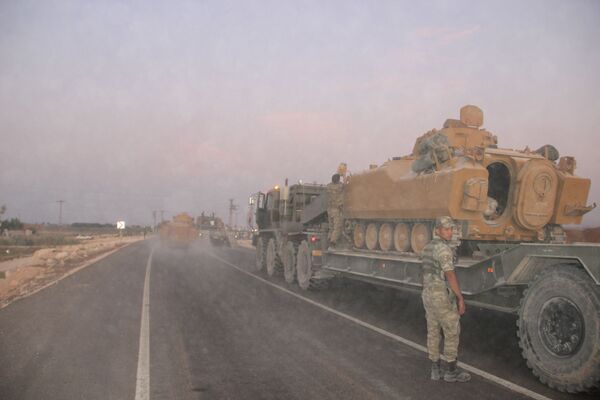 Turkish troops on the border with Syria
© Sputnik / Hikmet Durgun

The Erdogan-proposed "safe zone" in the north also prompts growing concerns, according to observers.

"Turkey has been violating Syrian territory for centuries, and this violation did not end up with the collapse of the Ottoman Empire," says Kadi.

Citing the region's history, he notes that all territory south of the Taurus Mountains is "geographically, demographically and historically Syrian", adding that "the regions of Iskenderun and Cilicia" were given to Turkey by the French "as a consolation prize" in the 20th century.

"And now, Erdogan wants to move the border further south by 30-40 more kilometres. This move cannot have any positive outcome for Syria; only negative," the political commentator opines.

On Thursday, Foreign Minister Mevlut Cavusoglu asserted that Turkey’s incursion would not go further than 30 kilometres into northeast Syria: "When we go 30 km deep in the safe zone, terror there will be removed," the politician said.

According to Kadi, Erdogan is apparently seeking to move Syrian opposition forces loyal to him to the region after expelling the Kurds and thus maintain control over the territory. Turkey has dubbed these forces the "Syrian National Army".

"This is not a new tactic. Israel played the same game after its 1982 invasion of Lebanon," he remarks.

Mark Sleboda, an international affairs and security analyst, shares Kadi's concerns: "There are no 'pros' of the euphemistically termed Turkish-proposed 'safe zone' in Syria", he asserts.

The security analyst envisions that having ousted the Kurdish militias, Ankara would repatriate 3.6 million Syrian refugees and relocate numerous foreign proxy fighters who fled the Syrian war zone for Turkey to the region. Citing recent polls, he notes that the Turkish people want the refugees gone.

"[Erdogan's strategy] solves the refugee and proxy fighter problem, serves as a 'final solution' to the problem of sympathetic Syrian Kurds on the other side of the now-meaningless border, and serves as a means of leverage and control over Syria with its north turned into a protectorate supported by and loyal to the Erdogan regime in Turkey," Sleboda suggests.

Having said that the recent offensive violates the country's sovereignty, the security analyst points out that three years ago Turkey established control over "a large swathe of Syrian territory along the border essentially from Idlib and Afrin in the west through to the 'Euphrates Shield' operation zone in the Jarablus corridor". According to him, the recent expansion of the Turkish military presence in Syria is ringing alarm bells.