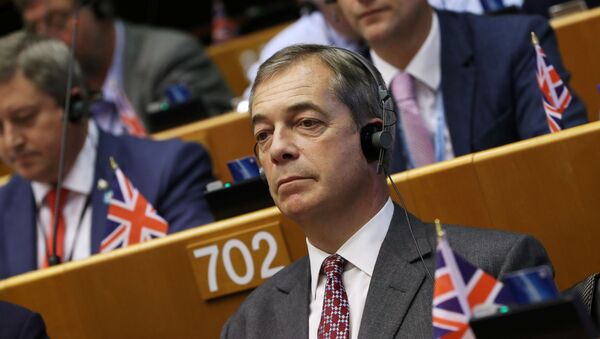 The resolution re-hashed familiar ‘Russian meddling’ accusations that Moscow has categorically rejected. Britain has been sounding the Russian fear-mongering alarm the loudest; last year, London succeeded in getting Russian diplomats expelled from dozens of countries in a bid to seek solidarity over its Skripal allegations.

The motion, put to the European Parliament on Thursday, urged European institutions to set a “detailed strategy to counteract Russian disinformation strategies” and called for an upgrade of the EU’s anti-propaganda taskforce, which would make it a permanent structure within the European Eternal Action Service.

The non-binding resolution also accused Facebook of not following up on most of the MEPs’ demands to prevent a repeat of the Cambridge Analytica data scandal, when the personal information of 87 million users was harvested by a political consultancy.

Brexit Party MEPs have cast their votes against the motion. "The Brexit Party exists to remove the United Kingdom from the EU and ensure we are democratically governed. We will always vote against more power and spending by the EU,” said MEP David Bull.

“We won't take lessons in democracy from parties which have packed together in order to frustrate the Brexit vote, the largest democratic act in recent British history.  Stories of Russian interference have been exposed as baseless propaganda and scare stories used to shut down debate. As a party of free speech, we oppose shutting down debate.”

The British government has repeatedly accused Russia of election meddling and interfering in the 2016 Brexit referendum through “troll factories” spreading fake news, but has failed to provide any evidence to date. Russia has consistently dismissed the allegations, which have not been corroborated by the major social media platforms such as Facebook and Twitter.

It’s curious that Britain itself was financing a shadowy project interfering in the domestic affairs of European countries and seeking to damage Russia’s relations with other nations under the guise of “defending democracy against disinformation”.

Brexit Party MEP Claire Fox told the European Parliament that “Brexit voters didn't vote because of Russian bots or Facebook – but because we believe in sovereignty” and that the EU was the one to interfere in elections and referendums.

The party could not avoid some flak from unlike-minded MEPs over their firm stance on Russia. Catherine Bearder, the leader of the Liberal Democrat bloc, said: “It is frankly shocking that Brexit Party MEPs today refused to support enhanced measures to tackle attacks on our democratic processes from Russia and elsewhere. They wrap themselves in the union flag, but they repeatedly fail to protect our national interest and do what is best for Britain.”

The vote passed by 469 votes to 143, with 47 abstentions, after it was supported by some of the largest fractions in the parliament – the European People’s Party, Socialists, Liberals and Greens.