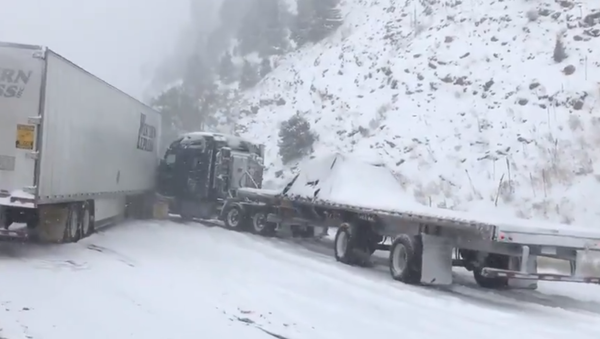 Moderate to heavy snowfall is expected to blanket parts of Colorado into North Dakota Thursday afternoon, with sections of the northern Plains already experiencing some snow accumulation, Weather.com confirmed. Storm warnings and watches have already been issued in North and South Dakota, northwestern Nebraska, Wyoming and parts of Minnesota.

So far, Rapid City in South Dakota has accumulated about 8 inches of snow, and Hettinger, North Dakota, has seen about 5.5 inches of snow. Around 2 to 3 inches of snow have been measured near Nebraska and Colorado. As of Wednesday, around 2 feet of snow had already fallen on parts of Montana.

According to the US National Weather Service (NWS), by Friday morning, a “more significant area of low pressure is forecast to develop along the front across the Upper Midwest, increasing the intensity of the snowfall west of the surface low across the Northern Plains.”

​By Saturday night, “historic amounts” of 1 to 2 feet of snow are expected to blanket parts of central and eastern North Dakota, possibly along with “gusty winds.” The NWS also referred to the storm as a “significant and potentially historic October winter storm.”

Strong winds may also lead to power outages in the northern Plains and along the Colorado Front Range, Weather.com reported.

In addition to snow, #WinterStormAubrey will usher much colder temperatures in the coming days.

​Driving conditions in Montana and northern Wyoming are already dangerous due to icy and snow-covered roadways. On Thursday morning, more than 100 car crashes were reported in Denver, Colorado, and there were at least three crashes involving more than 20 cars on Interstate 25 near Castle Rock, Colorado, Weather.com reported.

​More than 110 flights in and out of Denver International Airport were canceled Thursday, according to Flightaware.com.

000000
Popular comments
Don't you worry , boys and girls , I'm still a climate change denier , this is normal weather , no more than cyclical . The same with the extraordinary typhoon hanging over Japan , just cyclical , happens every 1000 years . those paper houses are easily rebuilt , although I am a little concerned about the occupants .