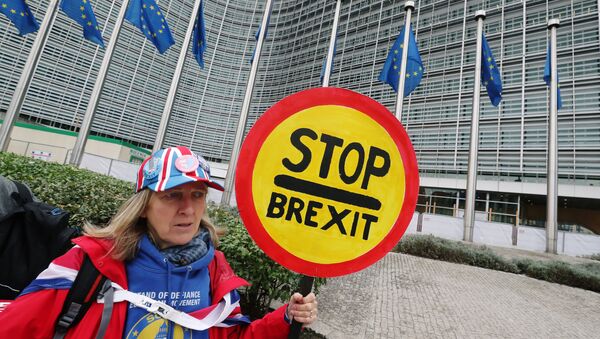 © REUTERS / Yves Herman
Subscribe
British Prime Minister Boris Johnson has met with Irish Taoiseach Leo Varadkar for further Brexit talks. Johnson has outlined that he is still optimistic that a deal can be struck between the UK and EU in the coming weeks, despite the fact that Brussels’ chief negotiator Michel Barnier, has repeatedly poured scorn over this notion.

But can a hard border between Northern Ireland the Republic of Ireland realistically be avoided after Britain severs ties with the bloc? Sputnik spoke with UKIP’s John Whitby to get his views on the matter.

John Whitby: It really is no more than a minor change realistically to Theresa May’s withdrawal agreement and it looks like the EU won’t accept it anyway because they want; as Merkel managed to point out the other day, to keep the UK locked in and will use Ireland to do that.

Sputnik: Will the UK leave the EU on October the 31st?

John Whitby: The EU’s rules and law state that we are leaving on the date stated unless something changes and EU law is supreme to UK law, so if Benn Act, which it does goes against the EU law which is defined in Article Fifty; then EU law has to trump it.

Realistically EU law says that we can’t actually ask for an extension, and in trying to get out from under EU law to make UK law supreme would have made that possible, but the fact that we are still in the bloc means that it shouldn’t be allowed.

The EU is in a situation where they bend their own rules to suit what they want, and they do not want the UK to leave.

Sputnik: Could Boris Johnson win the next British general election?

John Whitby: If anyone has any intelligence; Corbyn won’t have a hope in hell. What I think needs to happen, is that we need to have an agreement between the pro-Brexit parties so that we are not putting up competing candidates and splitting that vote, because the remain side certainly are working together.

We need to make sure that we do what’s in the best interest of this country, which is to get out of the EU as soon as possible and I think that actually a no deal scenario is the only option because I don’t think it will be possible to leave any other way.