Turkey on Lindsey Graham’s Threats Over Syrian Incursion: ‘We Were in a Rush to Unleash Hell’ 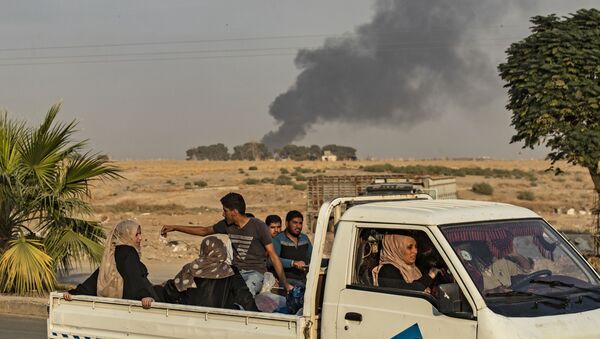 Lindsey Graham is attempting to stonewall Turkey’s military encroachment in northern Syria by pushing forward a bipartisan bill that would target Turkey with sanctions. Ankara says the operation was necessary to root out "terrorists" and help Syrian refugees return to their homes.

A Turkish government spokesman has rebuked US Senator Lindsey Graham over a tweet warning Ankara against launching an offensive in Syria.

Fahrettin Altun, the Turkish communications director, tweeted a response to Lindsey Graham on Wednesday, as Turkish forces entered Kurdish-controlled Syrian territory: “I heard that we may have ran a red light.”

“It was an emergency. We were in a rush to unleash hell on PKK and ISIS terrorists, who threatened our citizens.”

I am writing to inform you that Turkey and the Syrian National Army launched Operation Peace Spring today.

I heard that we may have ran a red light.

It was an emergency.

We were in a rush to unleash hell on PKK and ISIS terrorists, who threatened our citizens. https://t.co/TCuyllcQv3

What Did Lindsey Graham Say?

Altun's tweet came in response to Graham’s statement that Turkey did not “have a green light” to launch a military op in northern Syria. “There is massive bipartisan opposition in Congress, which you should see as a red line you should not cross,” the senator wrote.

Graham, a Republican and a key Trump ally, introduced a bipartisan motion on Wednesday alongside Democratic Senator Chris Van Hollen that would slap energy- and military-related sanctions on Turkey if it didn’t withdraw its forces from the Kurdish-held areas in northern Syria or operated there without US consent.

On the same day, Turkish forces entered Syrian territory east of the Euphrates River, which is de facto controlled by Kurdish forces, and started shelling their positions.

Why Did Turkish Forces Enter Syria?

Ankara said that the goal of the incursion is not to target Kurds specifically but to eliminate terrorists there. However, the Turkish government views the local power player – the Syrian Democratic Forces, who were instrumental in defeating Daesh* in that part of the country – as an extension of the Kurdistan Workers’ Party (PKK), a militant and political group banned in Turkey. Since 2016, Ankara has conducted two major anti-terror military operations in Syria that targeted both Daesh jihadists and Kurdish-led forces, with the elimination of the latter being the priority.

In addition to security concerns, Turkey is currently hosting around 3.6 million Syrians who had fled the bloody civil war, and wants to clear the area of what is sees as a terror threat to facilitate the return of up to 2 million refugees. The creation of a peace zone along the border with Syria, agreed upon with the United States, has stalled due to differences over the Kurdish militia. Ankara has previously warned that if this process is delayed, it would take cross-border military action.

The US government, which has long supported the Kurdish fighters in Syria in their joint fight against Daesh, has been sending mixed signals about the operation. President Donald Trump had ordered to draw US forces back from key positions in northern Syria prior to the op – clearing the way for a possible Turkish assault – but said days later that he did not endorse the operation and was ready to retaliate should Turkey go “off limits”.

*A terror group, also known as ISIS/Islamic State, outlawed in Russia, the United States, and many other countries.