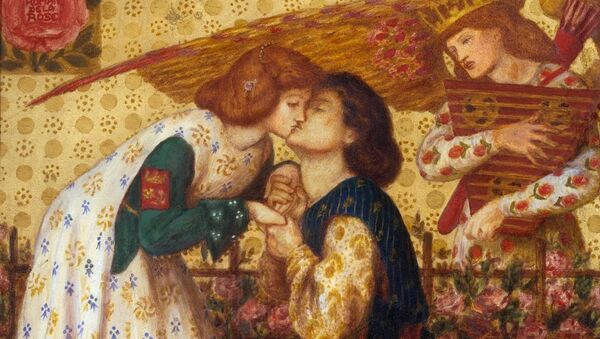 CC0 / /
Subscribe
Despite all the metaphors used in the novel’s explicit scene, it’s probably not that difficult to figure out what kind of staff the character featured in it wields and what kind of “worship” he seeks to perform.

An early version of the “Romance of the Rose”, a popular medieval French poem which Live Science described as “the ‘Twilight’ of its day, a crowd-pleasing romance that was reproduced again and again,” was discovered in the archives of the Diocese of Worcester where its pages served as book binding for some other old documents.

The media outlet points out, however, that while every version of the novel is “slightly different”, this particular iteration features an explicit scene that was left out of modern printings of the novel, “one that is more ‘Fifty Shades of Grey’ than ‘Twilight’.”

The scene in question, which apparently depicts a sexual encounter through the language of metaphors, depicts the lover presenting himself as a pilgrim presenting himself before a reliquary; he speaks of his staff as “stiff and strong” and mentions "sticking it into those ditches," and then describes himself as kneeling in front of the relic "full of agility and vigour, between the two fair pillars...consumed with desire to worship."

"'The Roman de la Rose' was at the centre of a late medieval row between intellectuals about the status of women, so we have the possibility that these specific pages were taken out of their original bindings and recycled by someone who was offended by these scenes,"a medievalist at the University of Bristol named Marianne Ailes, who identified the new fragments in question, said.

The media outlet also points out that in 1900, medievalist F.S. Ellis refused to translate the “raunchy section” into English, leaving it in its original French instead and writing that he "believes that those who will read them will allow that he is justified in leaving them in the obscurity of the original."