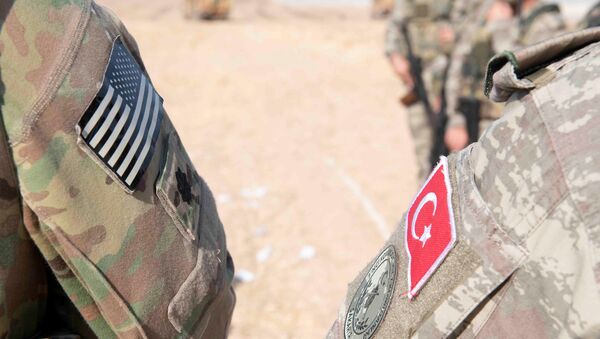 Turkish President Recep Tayyip Erdogan has announced Ankara’s military offensive against the Kurdish-led Syrian Democratic Forces just a day after US President Donald Trump announced he would pull troops from Syria. However, with US troops simply shifted in the region, questions remain about Trump’s actual motivation.

On Wednesday, Erdogan announced that Turkey would be carrying out “Operation Peace Spring” in order "to neutralize terror threats against Turkey and lead to the establishment of a safe zone" and combat terrorism in the region.

The move and its intended “safe zone” for refugees have been condemned by the European Union and European Commission President Jean-Claude Juncker, who said “it will not work,” in a Wednesday address in Brussels.

Nevertheless, Turkey has pushed forward, and some Washington officials are even defending Ankara’s offensive.

Ambassador Peter Ford, the former UK ambassador to Syria, joined Radio Sputnik’s Loud and Clear on Wednesday to discuss the Washington’s possible motivation behind moving US troops in the region

“It looks like all the US has done is … pull back 150 guys who [were] sprinkled in that northern safe zone,” Ford told hosts John Kiriakou and Brian Becker. “But they are still there with the rest of the 1,000 occupying that quarter of Syria, which is effectively controlled by the US.”

While the move is minor, the ambassador pointed out that now the Turks are able to make their first move in the region “without having to worry about tripping over US” troops.

Amid both domestic and international backlash for Trump’s decision, US Secretary of State Mike Pompeo spoke with PBS in a Wednesday interview and said Washington in no way provided Ankara with “a green light.” He went on to defend Turkey’s offensive by asserting they had "legitimate security concerns” and argued that Trump’s decision to move to troops was out of concern for their safety.

Ford highlighted that “the Turks are not actually being threatened by the Kurds [and] there have been virtually nil incursions from the Kurdish side of the Syrian border,” and that Turkey’s claim of respecting “the territorial integrity of all our neighbors" is false.

Instead, Turkish troops have been deployed to “prevent the emergence of a US-protected Kurdish statelet,” Ford said.

According to him, it is likely that the Kurds will “mount a token resistance,” rather than to go all in against Turkey, and “hope the hullabaloo in the US will force the Turks to either stop or withdraw.”

Ford reiterated that while Trump said he wanted to bring the US troops home, the fact remains that they are still in Syria. Prior to this move, part of the rationale given for having a US troop presence in the region was to deter a Turkish attack, but with that no longer being an objective, “the only remaining rationale is to deter the Syrians from regaining control of their own country,” he asserted.

“You have to ask: at the end of the day, what right does America have to prevent a country like Syria [from] establishing control over itself? This is purely colonial, imperialist behavior.”