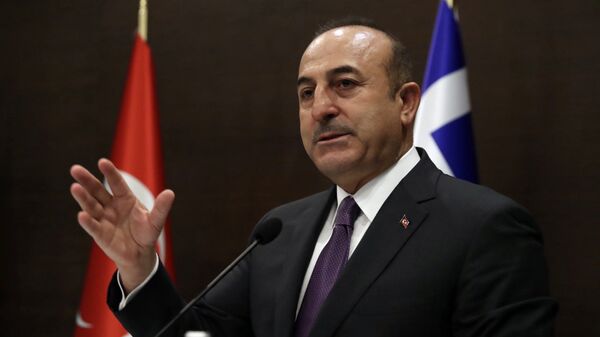 The Foreign Minister commented on Turkey's military operation in northern Syria while speaking to reporters in Ankara.

Turkey's Minister of Foreign Affairs Mevlut Cavusoglu accused Washington of supplying "sophisticated and heavy" weapons to Kurdish People's Protection Units (YPG) and the armed wing of the Kurdistan's Workers' Party, which he characterizes as "terrorist organization."

He mocked Washington for supporting a "terrorist organization" instead of Turkey, a "NATO ally."

Speaking about the Turkey's military incursion into Northern Syria, Cavusoglu vowed to take care of Daesh prisoners held in detention camps in Northern Syria after ridding the area of the Kurds.

Earlier, Syrian Kurdish organizations noted that they were forced to "struggle" to control the Daesh detention camps, after the vast portion of their forces were relocated up north to fend off the Turkish invasion.

The Turkish foreign minister said that women and children from the camps should be rehabilitated, describing it as another aspect of the fight against Daesh.

He said it will fall to the Kurds and the US to take care of the terrorists in camps outside of a 30-kilometer safe zone which Turkey seeks to establish in Northern Syria.

"The U.S and others made very clear that they will be staying in the southern part of the planned safe zone that we are going to establish. So, it will be under the responsibility of Americans and the others," he said.

According to the Daily Sabah, Turkey plans to resettle 2 million Syrian refugees in the safe zone after it is cleared of the YPG/PKK presence, but Cavusoglu underscored that Ankara will not force the refugees to return.

"Already, 370,000 of them went back to these two areas [liberated in Turkey's Euphrates Shield and Olive Branch Operations] voluntarily, and we do our best to supply what they need," the Minister said. "It has been nine years we never forced refugees."

In 1998, Syria and Turkey signed the so-called Adana agreement, which obliged Damascus to recognize Kurdish organizations as terrorists and cease all support. Turkey justifies its military incursion into Northern Syria by claiming that Damascus is not in control of its northern territories and therefore it falls upon Ankara to establish its own security. However, in his interview, Cavusoglu underscored that the 1998 agreement is still relevant and should be used as a basis for an eventual political settlement.

"When there is a political settlement in Syria, then we can talk about this," Cavusoglu said.