'Beetles?' Trump Trolled for Typo as He Tweets Two 'Worst of the Worst' Daesh Fighters Out of Syria 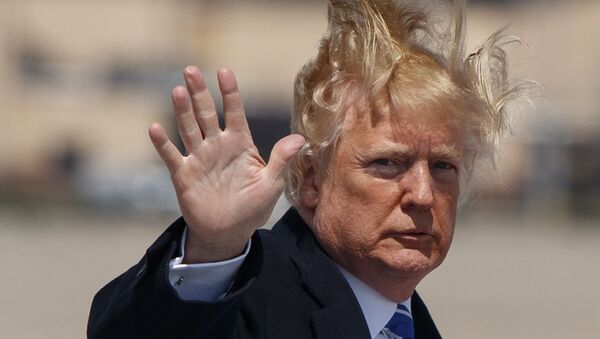 © AP Photo / Evan Vucci
Subscribe
Donald Trump's tweet comes shortly after The Washington Post reported that the US military had taken custody of two Daesh terrorists originating from the UK who were being held by Kurdish militia in northern Syria.

US President Donald Trump has once again found himself at the epicentre of a Twitter troll-fest as he has confirmed on the micro-blogging platform that two Daesh* fighters, known as the Beatles, have been taken out of Syria to a more secure location.

In case the Kurds or Turkey lose control, the United States has already taken the 2 ISIS militants tied to beheadings in Syria, known as the Beetles, out of that country and into a secure location controlled by the U.S. They are the worst of the worst!

In the tweet, Trump has, however, made a typo, writing the "Beetles" instead of the "Beatles", which instantly set off a major firestorm on social media:

I love the Beetles. Also the Rolling Stonez and U Too.

It's after midnight and Donald Trump is ranting about the Beatles while spelling it "Beetles." This guy belongs in a dungeon.

Trump acknowledges prospect that Turkey and Kurds could lose control of ISIS militants in their custody.

Trump: “No, I’m pretty sure it’s the Beetles. These guys look nothing like
John, George, Paul and Ringo.” pic.twitter.com/jGUBj1hwKe

Trump's tweet follows a Washington Post report, which claimed that the US military had relocated two Daesh members, El Shafee Elsheikh and Alexanda Kotey, transfering custody from the Kurdish forces in northern Syria ahead of the Turkish military operation in the country.

It is unclear where the two will be taken, but the newspaper quoted an unnamed senior US official as saying that they will be transferred to Iraq, ostensibly along with a group of other “high-value” detainees.

Elsheikh and Kotey were members of a four-man group of terrorists nicknamed “Beatles” because of their British origin. One member of the group was killed in a drone attack in 2015, while another one is now in a Turkish jail serving a seven-year sentence.

Washington has repeatedly called on London to take their Daesh fighters back, but British authorities claimed in 2018 there was “not enough evidence” to prosecute them in their country of origin and suggested the two be tried in the US. Both were stripped of their UK citizenship over their adherence to the terrorist group.

*Daesh, also known as ISIS/IS/ISIL/Islamic State, is a terrorist organisation banned in Russia and many other countries.

000000
Popular comments
Trump should fire his tweeter that wrote this tweet for him and hire a new one.