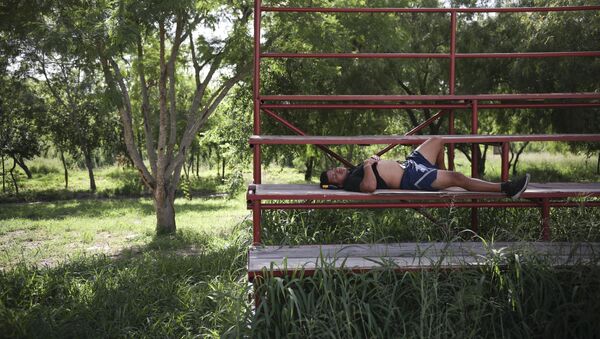 © AP Photo / Emilio Espejel
Subscribe
MEXICO CITY (Sputnik) - A group of 100 people, which is currently waiting for the United States to respond to their requests for asylum on humanitarian grounds, has blocked a bridge across the Rio Grande river connecting the Mexican city of Matamoros with US Brownsville, local media reported on Thursday.

According to migrants, they could not wait in Matamoros for their immigration court appointments, many of them in January.

"We want work to put our children on their feet, we need you to support us, we also need means to exist, we are exhausted, we have sick children and elderly", one of the migrant said, cited by Milenio newspaper.

The blockade caused chaos on the Mexican side among those who travel to the US to work or study.

The United States Customs and Border Protection agency (CBP) has closed all points of entry and prepared to act in case migrants attempt to cross the bridge.

US President Donald Trump made enforcement of the country's immigration laws one of the key tasks of his administration cracking down on illegal immigration and tightening US asylum laws.

Despite that, the number of people, especially from Latin and Central American countries, wanting to enter the US through its southern border remains high.

In recent years the US Immigration Court backlog was has surpassed one million pending cases making speedy processing virtually impossible and thus making migrants and asylum seekers wait in Mexico for considerable periods of time during which they have a hard time finding employment and provide for themselves.

On 7 June, the United States and Mexico reached an agreement on curbing illegal migration through the US-Mexican border. Under the agreement, the United States vowed to refrain from imposing tariffs on Mexican goods, while Mexico committed to deploying its National Guard throughout the country and, especially, to its southern border to fight the influx of undocumented migrants.

Caravans of migrants from Central American countries seeking asylum began to move toward the United States through Mexico last fall. Trump has called the surge of arrivals a crisis and declared a national emergency in February to secure funds to build a wall on the border with Mexico.