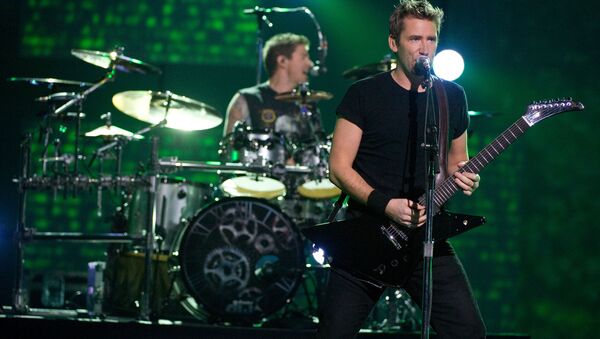 Svetlana Ekimenko
All materialsWrite to the author
US President Donald Trump's doctored video targeting former Vice President Joe Biden and his son Hunter, although removed by Twitter due to copyright infringement, has succeeded in generating a storm of response on social media.

​Rock band Nickelback saw its 2005 hit song “Photograph” spike in popularity and sales in the wake of US President Donald Trump posting a meme-y video of the track by the Canadian artists on Twitter.

On-demand streams of “Photograph” on platforms like YouTube, Apple Music and Spotify jumped 38 percent to hit 772,000 streams, according to Nielsen Music.

Donald Trump had fired a broadside at Democrat presidential hopeful Joe Biden, and his reportedly dubious ties to Ukraine after the US President was accused of trying to pressure his Ukrainian counterpart to investigate Biden’s son Hunter, sparking an impeachment inquiry against him by House Democrats.

The video, shared by Trump on 2 October, opened with a clip of Biden saying he had never discussed business dealings with his son.
Then the clip posted by Trump cut to a music video for the 2005 Nickelback single Photograph, which has been a meme online for several years.

In the original, vocalist Chad Kroeger holds up a picture to the camera, singing:

"Look at this photograph, every time I do it makes me laugh."

However, the picture had been edited to show Kroeger holding up an old photo of former vice president Joe Biden.

Biden was pictured on a golf course with his son Hunter, and his son's longtime business associate, Devon Archer, identified only as a "Ukrainian gas exec."

While Donald Trump’s video was removed on a copyright complaint reportedly from Nickelback’s label Warner Music Group, the surge in publicity for the band threw them back into the spotlight.

Netizens were quick to weigh in on the meme and the band’s surge in relevance, as many commented that tweeting Nickelback should be an “impeachable offense.”

Making #Nickelback even briefly relevant again is an impeachable offense.

Bringing Nickelback into any fight in 2019 is an impeachable offense.

Trump is indeed great. He is making Nickelback great for the first time. 🤣🤣🤣🤣🤣

Right when you had forgotten they ever existed!