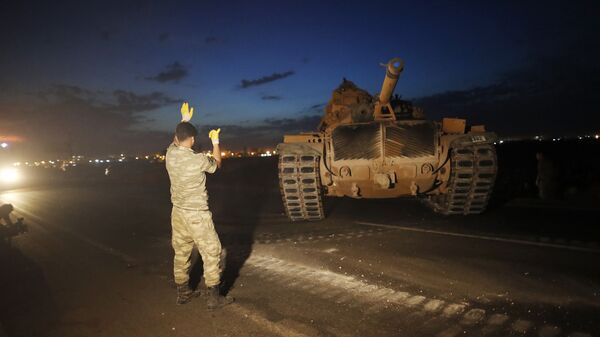 Last week, Turkey announced that it would launch a military incursion in northeastern Syria to drive away Kurdish militants from the area and set up a "safe zone" in the region to accommodate Syrian refugees there. The US said it would never back the Turkish operation and would withdraw its troops from the Kurdish-held territory.

According to the President, the offensive's primary targets will be the Kurdistan Workers' Party and Daesh*.

Turkey’s forces are continuing their advance in northern Syria within the framework of Ankara’s Operation Peace Spring, the Turkish Defence Ministry said in the early hours of Thursday.

"Our heroic commandos who are participating in Operation Peace Spring continue to advance [into the region] east of the Euphrates River in northern Syria," the ministry said.

During his call late on Wednesday, the emir also addressed ways to support and strengthen bilateral ties with Turkey, the state-run Qatar News Agency reported.

The reports added that the two leaders had also discussed the latest developments in the region, including the situation in Syria.

Permanent Representative to the United Nations Feridun Sinirlioglu said in a letter to UN Secretary-General Antonio Guterres that Ankara launched a military operation in northern Syria in line with self-defence to combat the terrorist threat.

"Turkey initiated Operation Peace Spring on October 9, 2019, in line with the right of self-defense... to counter the imminent terrorist threat, to ensure Turkey’s border security, to neutralize terrorists starting from along the border regions adjacent to Turkish territory", the letter seen by Sputnik on Wednesday said.

In the letter, the envoy said Turkey tried to remedy the conflict in line with UNSC resolutions before launching the operation. He also said that Ankara is still committed to resolving the crisis in Syria via a political solution as outlined in the Geneva communique and UN Security Council resolutions.

One of the prisons that ISIS detainees held in was struck by Turkish airstrike. Turkey is aiming to undermine all successful efforts and achievements that we gained during our fighting against #ISIS.

Currently Ankara is conducting a fresh land offensive in northeastern Syria as part of Operation Peace Spring against Kurdish groups and the Islamic State terrorist group (IS, banned in Russia).

"Our minister had a phone conversation with US State Secretary Mike Pompeo," the source said.

Trump Agrees on Need For Sanctions Against Turkey, Wants Something 'Tougher Than Sanctions'
20:57 GMT 09.10.2019

“It’s up to Turkey and its neighbors to decide, we can’t give such advice,” Polyanskiy said when asked whether he believes Turkey should halt the offensive. “But we adhere to the territorial sovereignty of Syria.”

Polyanskiy said Russia wants to promote dialogue between the Kurds and the Syrian government.

About 40 commanders of the Syrian Democratic Forces (SDF) were killed and injured as a result of attacks by the Turkish Air Force in the border areas in northeast Syria, an eyewitness, a resident of the border town of Ras al-Ain said on Wednesday.

"Turkish military helicopters fired at the US base Tel Arqam in the city of Ras al-Ain when representatives of the command held a meeting there. As a result of the shelling, about 40 SDF commanders were killed and injured," the source said.

Earlier, eyewitnesses confirmed that Turkish forces had entered the city, starting clashes with the Arab-Kurdish SDF.

According to SDF spokesman Mustafa Bali, the Kurdish-led forces managed to repell a ground attack by Turkish troops.

Ground attack by Turkish forces has been repelled by SDF fighters in Til Abyad. No advance as of now.

"(It is ) is jeopardising the anti-Islamic State coalition's security and humanitarian efforts and is a risk for the security of Europeans. It has to end", Jean-Yves Le Drian said on his Twitter.

The Council of the League of Arab States (Arab League) at the level of foreign ministers will convene on 12 October for an emergency meeting to discuss the situation around the Turkish military operation in northern Syria, the organization announced on Wednesday.

"It was decided to hold an emergency meeting of the Arab League Council at the level of foreign ministers on Saturday, October 12, at the proposal of Egypt and with the consent of a number of states," the prominent regional organization said in a statement.

According to the statement, the meeting will discuss "the Turkish aggression on Syrian territory, which is an unacceptable encroachment on the sovereignty of an Arab state."

Manama condemned the Turkish offensive in Northern Syria on Wednesday, according to the state's news agency BNA.

The UAE foreign ministry said in a statement that the aggression represents a dangerous development and blatant and unacceptable aggression against the sovereignty of an Arab state in contravention of the rules of international law.

According to Mehr news, Iran's parliament speaker Ali Larijani cancelled on Wednesday his trip to Turkey.

"Larijani was invited by his Turkish counterpart to attend a parliamentary meeting in Turkey. His trip has been cancelled," according to Iranian Mehr news.

Turkey’s military incursion into Syria is a grave escalation; will cause untold humanitarian suffering, empower terrorist groups. The world must unite to avert a catastrophe, promote political resolution to the rights of all Syrians, including Kurds, to peace, dignity & security

The EU called on Turkey on Wednesday to stop "unilateral military action" in northeastern Syria as it undermines stability in the region and the prospects for political dialogue, according to a statement by head of European diplomacy Federica Mogherini.

"The EU calls upon Turkey to cease the unilateral military action. Renewed armed hostilities in the north-east will further undermine the stability of the whole region, exacerbate civilian suffering and provoke further displacements. Prospects for the UN-led political process to achieve peace in Syria will be more difficult," the statement says.

People are fleeing the Syrian town of Ras al-Ain in search of safer places after the beginning of Turkey's military operation, DHA has reported.

The Kurdish-led Syrian Democratic Forces (SDF) reported the deaths of two civilians as a result of Turkish airstrikes in northern Syria on Wednesday, the SDF Coordination and Military Operations Centre said.

According to the SDF, the victims of airstrikes were two residents of a village located west of the city of Ras al-Ayn in Hasakah province. Two more people were injured, the SDF reported.

The United Kingdom, France, Germany, Poland and Belgium will request the UN Security Council to convene a meeting on Thursday morning to discuss the Turkish military operation in the north of Syria, Belgian Ambassador to the United Nations Marc Pecsteen de Buytswerve told reporters.

MOSCOW (Sputnik) - Damascus will "take every action possible" to make Turkey "pay a heavy price for its aggression," Syrian Ambassador to China Imad Moustapha said on Wednesday, shortly after Ankara announced the start of its operation in North Syria.

Turkey described the offensive as an anti-terrorist operation that would preserve Syria's territorial integrity.

"It is major direct aggression by a foreign country on a neighbouring country which is in violation of all UN resolutions calling for respecting Syrian independence, territorial integrity and sovereignty," Moustapha said.

"The consequences will be grave and Syria will take every action possible, direct and indirect, symmetrical and asymmetrical, to make Turkey pay a heavy price for its aggression and violation of our territorial integrity," the diplomat added. According to Anadolu news agency, the rockets were fired from Qamishli towards the centre of the Turkish border town of Nusaybin.

NATO Secretary-General Jens Stoltenberg has said that the bloc has been notified of the Turkish operation, adding that Ankara does have 'legitimate security concerns'. At the same time, the official called on the Turkish authorities to ensure that their actions in the Middle Eastern country are proportionate.

Germany has strongly criticised the Turkish offensive in Syria saying that by launching a military operation, Ankara is risking to destabilise the situation in the region.

The SDF has received reinforcements in the vicinity of Tel Hamam Turkaman village where they are currently positioned. Victims among SDF members are reported in the Hoshan village in the north of Raqqa Province. According to reports, the Kurdish fighters are setting car tyres on fire to create a smokescreen against Turkish airplanes.

People are fleeing in droves from the town of Tel Abyad after Turkey's offensive in Syria began, an eyewitness told Reuters.

According to the witness, explosions can be heard and plumes of smoke can be seen near the border with Turkey.