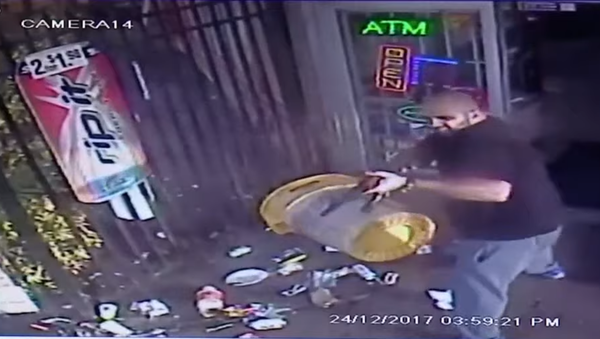 Recently released surveillance video of a December 24, 2017, altercation between an AK-47-wielding Kwick Pick owner and a customer has Florida police questioning the “Stand Your Ground” claims the owner initially provided.

The footage, released Tuesday, shows a visibly upset customer, identified as Jason Morris, arguing with employees and Saf Ahmad, the store owner, before storming out of the Lauderhill-area convenience store and kicking over a trash can.

While Morris appears to be preparing to drive away, he seemingly exchanges more words with employees inside the store and then hurls the same trash bin at the front door. A camera from a different vantage point captures Ahmad and another individual brandishing handguns in retaliation to Morris’ toss.

The situation quickly escalates as another item, later identified as a glass bottle of castor oil, is thrown at the door, and the store owner bursts out, firing at Morris with an AK-47.

Ahmad was eventually arrested by Broward County officers on a charge of aggravated battery with a deadly weapon not long after the incident. NBC News reported Morris was shot in the back and now suffers from a permanent disability.

At the time of his arrest, the store owner claimed Morris came into his business and began threatening to kill him and his employees because of a previous altercation that occurred inside the store which injured someone known to Morris.

Ahmad said he saw Morris brandish his own handgun and that he assumed the bottle of castor oil thrown at the convenience store was a grenade.

"Mr. Ahmad did not provoke a confrontation. The confrontation was brought to him and he defended himself," Andrew Rier, the store owner’s attorney, said on Tuesday.

"In this case, Mr. Ahmad believed he had no choice but to use force necessary to prevent imminent death or great bodily harm to himself as well as others present," Rier also claimed in a July filing.

Despite the store owner’s claim of self defense under Florida’s Stand Your Ground law, police are not buying Ahmad’s story. They say Morris did not possess a weapon and did not seem to be an immediate threat from outside the store. Officers also did not find evidence in the raw footage that backed up Ahmad’s claim of Morris brandishing a firearm.

The store owner is scheduled to appear in court for his next hearing on November 1.