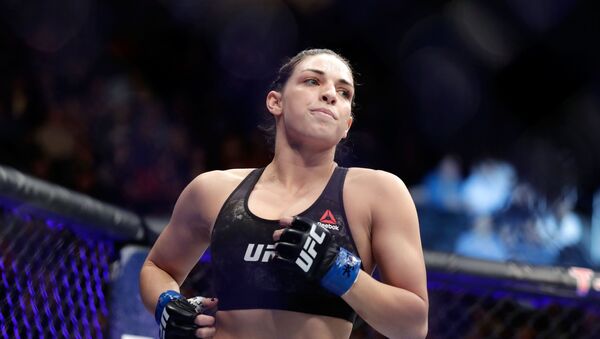 The fighter also noted that she already managed to recoup her initial losses on the Instagram subscription front by apparently attracting a different kind of audience than before.

During her recent interview with ESPN, she explained that after she posted the first picture of her husband, professional surfer Wesley Santos, and broke the news of her impending motherhood, several thousand of her subscribers didn’t seem to appreciate the move.

God makes everything so perfect! I am so happy to be able to share this news! I’m going to be a Mom! I love so much our family and now I have one more HUGE motivation for inside and outside the ring!! Thank you God for this blessing 🙏🏼 @santoswesley ❤️ I also want to thank all my fans and sponsors for the support during all the life phases and I can’t wait to be back in the ring! 🥊🥋 • • • • • Deus faz tudo perfeito!!! Estou muito feliz em poder dividir com vcs essa notícia! Vou ser Mãe!!!! Amo tanto essa minha família, agora tenho mais uma motivação dentro e fora do octógono!! Que esse/essa bebe venha com muita saúde. Agradeço Deus por essa benção 🙏🏼 @santoswesley ❤️. Também quero agradecer todos meus fãs e patrocinadores pelo apoio durante todas as fases da vida e não vejo a hora de voltar as lutas🥋🥊

"I had lost, like, 20,000 fans when I said I was pregnant and posted the first picture of my husband", she remarked.

However, Dern, who now boasts over 700,000 Instagram subscribers, has also revealed that she managed to recoup her losses since then by attracting a different sort of fans than before.

"After Moa was born I gained 20,000 back," she said. "I think it’s a different type of public, maybe I have more mums following and just people kinda inspired by, maybe the story."

With her maternity leave hiatus now over, Dern’s return to the UFC is scheduled to take place on 12 October when she is expected to face Amanda Ribas in the octagon.