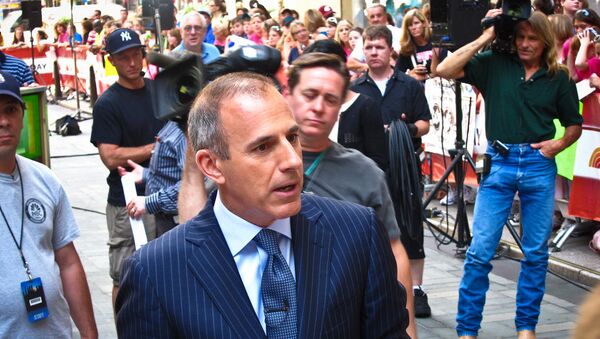 CC BY 2.0 / Nan Palmero / New York City | NYC | June 2010
Subscribe
In an upcoming book by investigative journalist Ronan Farrow, details of former NBC host Matt Lauer’s grisly 2014 sexual assault against a coworker are revealed, along with the accuser’s identity and that NBC paid her a “seven-figure” settlement after she was forced from the network.

Farrow’s upcoming book “Catch and Kill,” to be released on October 15, recounts his investigation of Harvey Weinstein that led to the Hollywood mogul’s downfall in 2017, sparking the #MeToo movement against sexual assault and the silence forced on victims. However, also contained in the book is an interview with Brooke Nevils, a former NBC employee who accused Lauer of sexual misconduct, leading to his termination in 2017.

Nevils’ identity is revealed in the book for the first time: she asked NBC at the time of her revelations to conceal her name from the reports, but as she tells Farrow, news quickly spread through the network, forcing her out as hostility spread and coworkers sided with Lauer.

Variety published excerpts from the book Tuesday morning, including the interview in which Nevils describes how Lauer anally raped her in a hotel room in Sochi, Russia, during the 2014 Winter Olympics.

Nevils told Farrow that one night in Sochi, she and co-anchor Meredith Vieira were interrupted by Lauer joining them during drinks at the NBC team’s hotel bar. After several shots of vodka, Nevils accepted an invitation to Lauer’s room, emphasizing that she had “had no reason to suspect Lauer would be anything but friendly based on prior experience.”

After the crew returned to New York, Nevils says she had several more sexual encounters with Lauer, whom she feared for the power he held over her career. “It was completely transactional,” she emphasized to Farrow. “It was not a relationship.”

Farrow also emphasizes that this is a pattern repeated with many sexual assault victims he spoke with during the course of his Weinstein investigation.

However, Nevils did reportedly inform both coworkers and superiors at NBC of what had happened in Sochi. “This was no secret,” Farrow writes. And yet, only once Farrow broke the story about Weinstein’s long track record of sexual assault in October 2017 did anyone start asking her questions about Lauer.

According to Farrow, following the Weinstein story’s publication, Vieira was the first person Nevils told about what happened that night in 2014 after their trip to the hotel bar, and she urged Nevils to go to NBC Universal’s human resources department with legal counsel in tow. Lauer was fired 24 hours later.

​“Matt Lauer’s conduct was appalling, horrific and reprehensible, as we said at the time,” NBC News said in a statement to Variety for the Tuesday story. “That’s why he was fired within 24 hours of us first learning of the complaint. Our hearts break again for our colleague.”

However, Farrow paints a different picture: network executives “were emphasizing that the incident hadn’t been ‘criminal’ or an ‘assault,’” he writes, adding that NBC chairman Andrew Lack telling employees the encounter had happened in Sochi all but pointed the finger directly at Nevils, who had been promised anonymity and protection from retribution by human resources.

“Nevils’s work life became torture,” he wrote. “She was made to sit in the same meetings as everyone else, discussing the news, and in all of them colleagues loyal to Lauer cast doubt on the claims, and judgment on her.”

She eventually went on medical leave and received a “seven figure” payment. Farrow noted NBC wanted her to read a script “suggesting that she had left to pursue other endeavors, that she was treated well, and that NBC News was a positive example of sexual harassment.”

Lauer’s lawyer gave Variety a reply prior to the story’s publication denouncing the claims and denying any wrongdoing by the former “Today Show” host.

“In a new book, it is alleged that an extramarital, but consensual, sexual encounter I have previously admitted having, was in fact an assault,” Lauer’s statement reads. “It is categorically false, ignores the facts, and defies common sense.”

However, in the wake of his 2017 termination, he apologized for "the pain" he had "caused others by words and actions."

Nevils’ wasn’t the only accusation against Lauer, though: her reporting of the incident opened up an avalanche of reports by other NBC employees of Lauer exposing himself to and forcing himself on female employees, gifting them sex toys with lewd messages, playing crude games in which he’d admit which co-hosts he’d most like to sleep with, and having a secret button underneath his desk that could close and lock his office door.