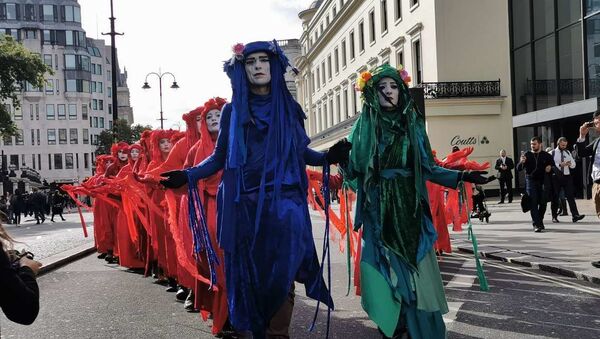 Demond Cureton
All materialsWrite to the author
The loosely-run organisation, which employs nonviolent forms of civil disobedience, is rebelling against a “6th mass species extinction” as well as “global pollution” and “abrupt, runaway climate change”, the group said in a press release.

Thousands of people gathered at the Extinction Rebellion (XR) camp at Trafalgar Square on Wednesday to protest what they call an “ecological crisis”.

A colourful but somber demonstration took place on Wednesday, where roughly thirty protestors marched along the strand and segued onto Waterloo bridge.

The activists wore mourning gowns in red, green, and blue, representing what is understood as ecocide against the planet’s land and water. 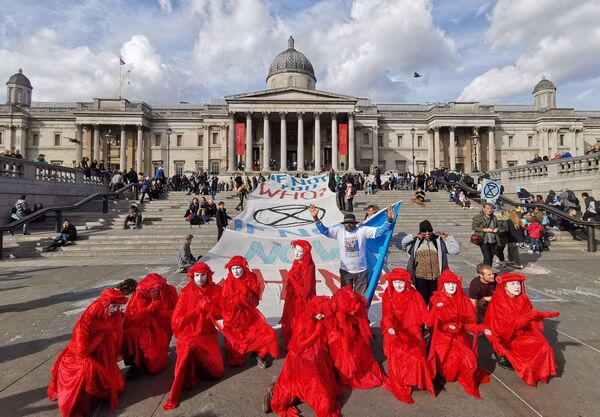 Performers from the Extinction Rebellion (XR) 'Red Brigade' pose for cameras in front of the National Gallery at Trafalgar Square on Wednesday, 8 October 2019.
© Sputnik / Demond Cureton

Activists wearing red costumes symbolised the rivers of blood that could ensue if humanity failed to tackle the climate crisis, according to one attendee.

Much of the Strand had been cordoned off by police, allowing the demonstrators to march along the motorway undisturbed, with onlookers taking photos.

Those failing to comply were “liable to arrest and prosecution,” the Met said in a statement.

The Met Police said: "Any assembly linked to the Extinction Rebellion 'Autumn Uprising'…who wish to continue with their assembly MUST go to Trafalgar Square and only assemble in the pedestrianised area around Trafalgar Column.

The action was necessary to “prevent the demonstrations from causing serious disruption to the community”, A Met spokesperson added.

The camp, a menagerie of tents, banners and operations, operated freely on donations from supporters and provided various facilities such as shirt printing, medical, food and drinks, as well as meditation centres.

XR Kids, a faction of the Extinction Rebellion movement, said that if children did not take action there would be “drastic actions” and that adults were feeling pressured to “keep that power and to become rich by supporting fossil fuels”.

They said: “This has to stop. People shouldn’t be putting their profit over our generation.

The speakers added that children were not “fully influenced by the voting system” allowing them to provide answers to the “immensely big issue”. 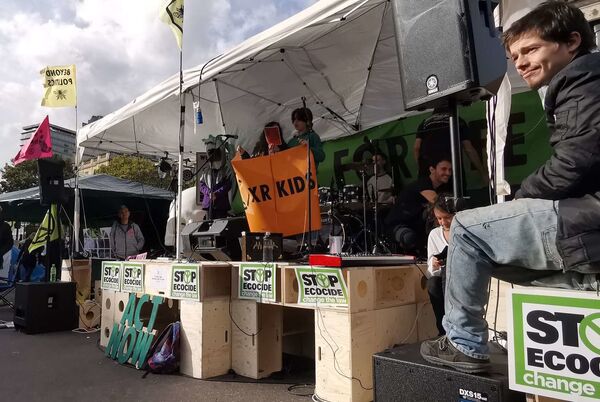 The speakers added: “We remain decentralised, which means that we have no global demands. Instead, local groups decide what they demand from their local governments.

The speakers added that XR Kids had taken “inspiration from past childhood movements” such as the Birmingham Children’s Crusade of 1963, where thousands of children were arrested for school strikes in Alabama to fight for racial equality during segregation in the US.

They said: “We intend to follow in their footsteps with a similar strategy. We will do all that it takes. This generation has nothing to lose.

Fly Today, No Tomorrow Protests Set to Begin On Thursday

XR demonstrators plan to occupy London City Airport from 9:00 GMT on 10-12 October in what it calls a ‘Hong Kong style’ protest.

Activists plan to occupy the terminal building by “lying, sitting or glueing-on" departure and arrival gates. Organisers unable to make it to the airport plan to blockade DLR stations and access roads, a Wednesday press release said.

XR spokesperson Rupert Read said that the London City Airport planned to “roughly double its number of flights, and the airports location caused “a lot of noise-misery" and “climate-deadly pollution”.

The airport was used “disproportionately” by numerous “polluter elite” in the City of London who could “do what they need just as well by using digital telecommunications”.

Mr Read added: “This has to stop and Extinction Rebellion are here to stop it.

He added by nonviolently shutting down City Airport using “the style of the Hong Kong democracy protestors”, XR could demonstrate the “utter frailty of the transport systems” that countries depend on.

Dr Larch Maxey of XR said that despite Labour and opposition leader Jeremy Corbyn tabling a motion to declare a Climate and Ecological Emergency, “the Government continues to support the expansion of air travel, in defiance of all reason”.

“Mass peaceful civil disobedience is essential to force our Government to take the necessary action before it is too late,” Dr Maxey said. “That is why so many of us are willing to give up our liberty to avert this disastrous course we are on.”

Extinction Rebellion protestors launched a series of demonstrations across Europe and the US set to last two weeks, where activists have blocked access to roads and bridges across London, with roughly 30,000 expected to participate in the rallies. The movement, which was founded in the United Kingdom in May 2018, calls on the UK government to take action against climate change and ecocide, among others. ‘International Rebellion’ demonstrations began on Monday and spread to 60 cities worldwide, with roughly 300 arrests taking place in London alone the same day.