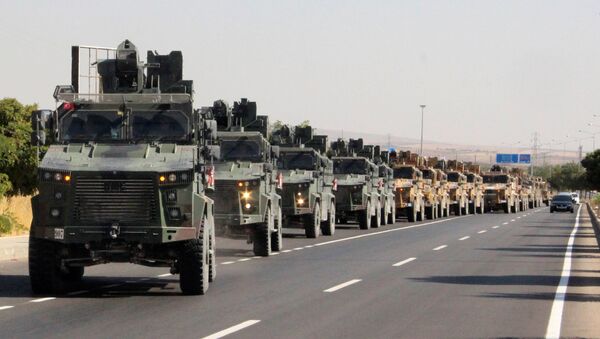 Earlier on Wednesday, Turkish President Erdogan and Russian President Putin talked on the phone and agreed on the importance of ensuring the unity and territorial integrity of Syria and respect for its sovereignty.

​Mr Erdogan added that the operation is aimed against the Kurdistan Workers' Party and Daesh* and is meant to protect Syria's territorial integrity.

This operation is being carried out in accordance with international law, Article 51 of the UN Charter and UN Security Council Resolutions on fight against terrorism. #OperationPeaceSpring🇹🇷

Syria's state TV has confirmed that the Turkish army launched an operation in the country's north by carrying out an airstrike on the city of Ras al-Ain. According to a statement by the Syrian Democratic Forces' press service, Turkish warplanes launched airstrikes on civilian areas, causing panic among the local population.

According to Turkey's NTV news channel, two mortar shells hit the border town of Ceylanpinar, no casualties have been reported. 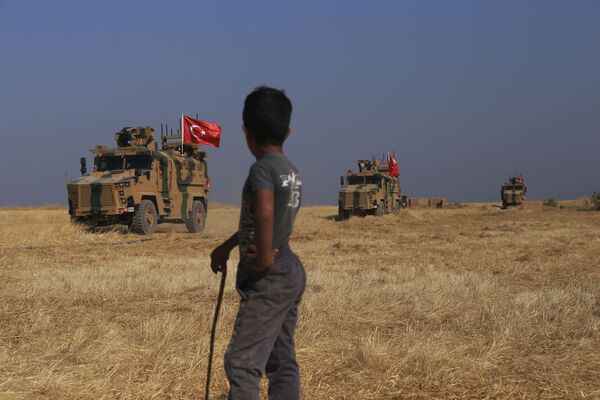 A Turkish n armored vehicles patrol as they conduct a joint ground patrol with American forces in the so-called "safe zone" on the Syrian side of the border with Turkey, near the town of Tal Abyad, northeastern Syria, Friday, Oct.4, 2019
© AP Photo / Baderkhan Ahmad

Earlier on Wednesday, Russian and Turkish presidents Vladimir Putin and Recep Tayyip Erdogan talked on the phone and noted the importance of ensuring the unity and territorial integrity of Syria and respect for its sovereignty, the Kremlin said.

According to the deputy chairman of the Russian upper house's foreign affairs committee, Vladimir Dzhabarov, Russia will stay out of the conflict between Turkey and Syria.

"Russia will definitely not get involved, this is not our conflict. Russian Armed Forces are not in Syria for this purpose, their aim is to help free Syria from international terrorism," the lawmaker said, adding that the Russian troops were in another part of the country, away from where Turkey's operation was happening.

Ankara and Washington have long been in talks over the creation of a "safe zone" in northern Syria but in September Turkey said that the US was stalling the process and said that it would establish the zone on its own if needed.

Earlier this month, Turkey announced that it would launch a military operation in northeastern Syria to oust Kurdish militants from the area and establish a "safe zone" in the region to accommodate Syrian refugees there. The US said it would never endorse the Turkish operation and would pull out its troops from the Kurdish-held territory.