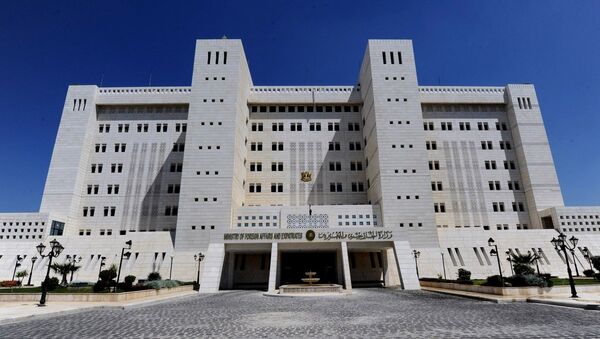 Turkey has begun amassing its military forces near the Syrian border as part of final preparations for the offensive in its northern neighbour announced over the weekend.

Damascus has condemned Turkey's upcoming military operation in Syria as aggression and a violation of international law.

"Syria strongly condemns irresponsible statements and aggressive intentions of the Turkish regime and its amassing of the army at the Syrian border, which is a disgraceful breach of international law and UN resolutions that respect Syria's sovereignty and territorial integrity," the country's Foreign Ministry said in a statement.

According to the statement, Ankara is manifesting its expansionist appetites which cannot be justified by any reasoning.

"Turkey's statements on the safety of the borders are disproved by the fact that they are in violation of the Adana agreements - if Turkey had adhered to the agreements then it could have ensured the safety of its borders" the statement added.

Erdogan announced on 5 October that a decision on the Turkish operation in Syria could be taken in the coming days. One the next day, Washington said that the US military would not take part in the incursion. Following the statement, the SDF reported that the US began pulling out its military contingent from the border areas. Washington responded to this by saying that the US is not fully withdrawing the forces but rather relocating the 50-person strong force.

The main objectives of the Turkish operation which Ankara has been contemplating since spring are the clearing of the border territories of Kurdish militants, creating a safe zone and relocating Syrian refugees in these areas.

Damascus does not recognise either the autonomous administration in the northeast or its military wing, the SDF. The Syrian government has held a series of rounds of negotiations with the Kurds which have so far been unsuccessful.