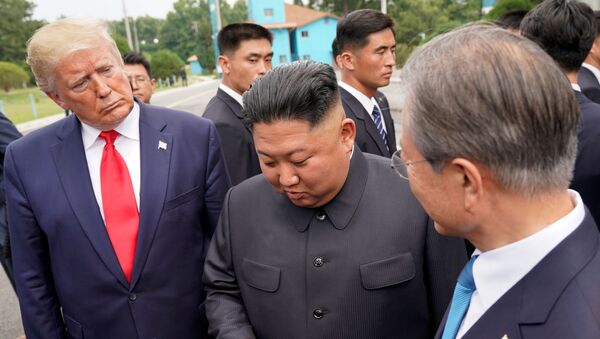 Renewed talks between Washington and Pyongyang Saturday quickly fell apart, as North Korean diplomats said the US brought nothing new to the table. With past talks collapsing due to US intransigence to compromise, future talks are unlikely to be any more effective, no matter how great a negotiator US President Donald Trump believes himself to be.

Denuclearization talks in Sweden between US and North Korean officials broke down last weekend, according to the North’s chief nuclear negotiator, Kim Myong Gil.

Journalist and author Stephen Gowans joined Radio Sputnik’s By Any Means Necessary Monday to discuss how the US is failing to build the much-needed confidence of North Korea that’s necessary to strike a working deal on denuclearizing the Korean Peninsula.

According to chief negotiator Kim, the US negotiators would not “give up their old viewpoint and attitude.”

“The negotiations have not fulfilled our expectations and finally broke off,” Kim told reporters Saturday outside the North Korean Embassy in Stockholm. “The US raised expectations by offering suggestions like a flexible approach, new method and creative solutions, but they have disappointed us greatly and dampened our enthusiasm for negotiation by bringing nothing to the negotiation table.”

The talks were the first since the one-day summit that took place at the Korean Demilitarized Zone between North Korean leader Kim Jong Un, South Korean President Moon Jae In and Trump in June at the Demilitarized Zone, following the 2019 G20 Osaka summit.

“The US approach - which hasn’t changed since February 2019, when they had the Hanoi summit - is not one based on a step-by-step, mutual confidence-building approach. It’s one based on ‘We demand, and you give.’ At Hanoi, in February, where talks broke down, the DPRK made an offer, and the offer was to close its Yongbyon complex, which produces plutonium, [and] to do so completely and permanently and verifiably,” Gowans told hosts Eugene Puryear and Sean Blackmon.

“It also agreed to halt nuclear tests and long-range missile tests in exchange for relief from some of the UN Security Council sanctions, particularly those aimed at strangling North Korea economically. And then North Korea said, ‘This follows the principle of step-by-step confidence-building that we agreed [to] at the June 2018 Singapore summit,’ and it has been said in some press reports that Trump was tempted to accept that deal, but his national security adviser [at the time, John] Bolton and the Secretary of State [Mike] Pompeo objected, and instead the US came back with the demands that North Korea abandon its nuclear/chemical/biological weapons program, that it eliminate all of its facilities for producing fissile material and that it destroy its ballistic missile systems. And the North Koreans said, ‘That's completely unacceptable,’ and the talks died,” Gowans explained.

“Since then, we have [had] the June meeting between Kim Jong Un and Donald Trump in Korea. Trump talked about resuming the negotiations; then we had the firing of Bolton and talk about, ‘Well, we’re going to have a new approach. We have more creative proposals.’ According to the DPRK side, the UN arrived at these meetings with more of the same. So from their perspective, what’s the point of continuing these negotiations if you’re not going to negotiate? You’re simply going to demand that we eliminate our nuclear arsenal and essentially leave ourselves vulnerable to military aggression,” Gowans explained.

However, despite North Korea’s outspoken disappointment with the most recent talks, the US insisted that the meeting brought about “good discussions.”

"The US brought creative ideas and had good discussions with its DPRK counterparts," State Department spokesperson Morgan Ortagus is quoted as saying.

“There’s not much that [is] admirable about Bolton,” Gowans said, noting that “at least he was consistent in his thinking. And I think his view was, and always was, that the North Koreans would never relinquish their nuclear weapons, and this was consistent with US intelligence community view - but this is a conditional statement. They will never relinquish their nuclear weapons unless the US provides the security guarantees it’s seeking, and the US has no intentions of providing those security guarantees.”

Gowans said that Trump’s disagreement with Bolton stemmed from his belief in himself “as some kind of formidable negotiator” who could “somehow persuade the North Koreans to relinquish their nuclear weapons.”

The North Korean Foreign Ministry on Sunday warned the United States that if Washington did not alter its "hostile policy" toward Pyongyang and did not propose a realistic solution to denuclearization by the end of the year, North Korea would not continue negotiating, Sputnik reported.