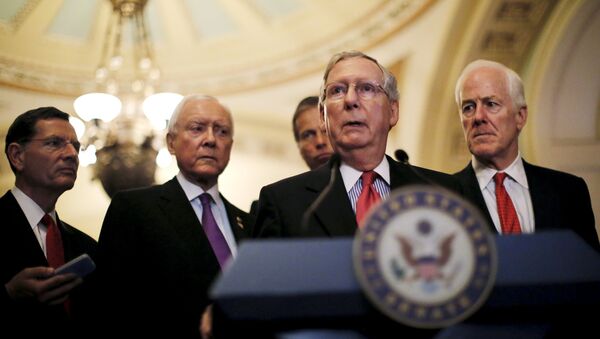 WASHINGTON (Sputnik) - US President Donald Trump must work to deter any conflict between Turkey and Kurdish fighters in order to prevent further escalation in the Middle East, US Senate Majority Leader Mitch McConnell said on Monday.

"I urge the President to exercise American leadership to keep together our multinational coalition to defeat ISIS [Daesh] and prevent significant conflict between our NATO ally Turkey and our local Syrian counterterrorism partners", McConnell said in a statement.

Cruz said in a statement that it would be disgraceful to set idly by while Turkey slaughters the Kurds, as public reports suggest that Turkish leader Erdogan explicitly told President Trump he intends to do.

"Kurds risked their lives-for many years-to fight alongside us", Cruz said.

Cruz added that although it is important to avoid leaving US troops in Syria for a lengthier period of time, it is also important to address national security interests in the region, such as preventing the potential re-emergence of the Daesh terror group.

US Congressman Will Hurd, a former CIA officer, said in a statement that not supporting the Kurds means surrendering the Middle East to Iran, Russia and Turkey.

Hurd added that such a move would show US allies that an alliance with the United States "means nothing".

Turkey considers Kurdish forces in Syria to be an extension of the outlawed Kurdistan Workers' Party (PKK). Turkey has classified the PKK as a terrorist organization.

The Turkish combat planes reportedly earlier on Monday delivered an airstrike against a military base hosting Arab-Kurdish units of the Syrian Democratic Forces (SDF) in Hasakah province in northeastern Syria.

On Saturday, Turkish President Recep Tayyip Erdogan announced that Ankara may launch a military operation in Syria in the coming days to clear the border area from Kurdish fighters. The White House has said that US forces would not support the Turkish military operation and would withdraw from the area.

Later, the Turkish Defence Ministry said in a statement that Ankara has completed preparations for the military operation in northern Syria.