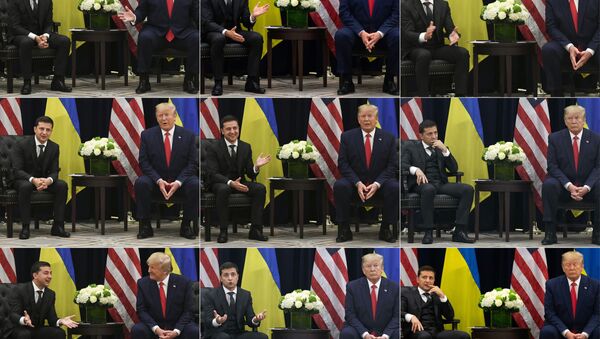 Late last week, it was reported that a second US intelligence official is considering submitting his own whistleblower complaint over US President Donald Trump’s phone call with Ukrainian counterpart Volodymyr Zelensky in July. Earlier, the first whistleblower’s complaint over the call triggered an impeachment process against Trump.

The first whistleblower wrote a personal memo after the Trump-Zelensky telephone conversation, citing an unnamed White House official as saying that the call was “frightening”, Fox News reports.

“The following is a record of a conversation I had this afternoon with a White House official about the telephone call yesterday morning between President Trump and Ukrainian President Volodymyr Zelensky,” according to the 26 July two-page memo, a copy of which was obtained by Fox News.

The document, in particular, read that due to the fact that the Trump-Zelensky call “only lasted a few minutes”, the whistleblower “only received highlights”.

In the memo, the whistleblower added that the White House official “described the call as ‘crazy,’ ‘frightening,’ and ‘completely lacking in substance related to national security’”.

In context of previous criticism that the White House-released transcript of the call was notes or a summary, the memo argued  that it was the “standard practice” for the “White House situation room to produce a word-for-word transcript that memorialises the call”, during which “The President did not raise security assistance”.

“The President told Zelensky that he would be sending his personal lawyer, former New York mayor Rudy Giuliani, to Ukraine soon and requested that Zelensky meet with him. Zelensky reluctantly agreed that, if Giuliani travelled to Ukraine, he would see him,” the memo read.

This comes after the New York Times cited sources as saying that a second US intelligence official is considering submitting his own whistleblower complaint over the Trump-Zelensky call, which prompted the Democrats to initiate an impeachment inquiry against Trump.

The official, who claims to have more direct knowledge about the events than the first whistleblower, was thought to be among those interviewed by Michael Atkinson, inspector general of the intelligence community, to corroborate the allegations brought by the original whistleblower.

The inquiry was initiated after the first whistleblower sent a complaint to Congress, claiming that during the 25 July phone call with Zelensky, Trump had pressed the Ukrainian President to investigate alleged corruption by 2020 Democratic presidential candidate Joe Biden and his son Hunter Biden, implicitly threatening to withhold US military aid to Ukraine.

The Democrats insist that the phone call provides evidence that Trump had used his presidential power to solicit foreign interference in the US 2020 presidential elections.

Trump, in turn, reject the allegations, calling a new instance of “witch hunt garbage” and referring to the phone call with Zelensky as a casual and absolutely "normal" one.

In a recent tweet, Trump suggested that Pelosi and House Intelligence Committee Chairman Adam Schiff who handled the anonymous complaint regarding the Ukraine call, should be “immediately impeached along with all of those that evilly ‘colluded’ with them”.