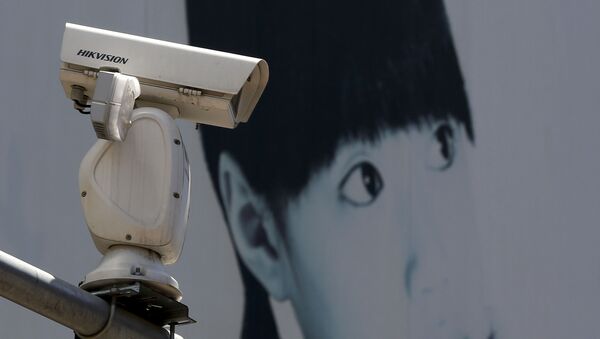 © AP Photo / Andy Wong
Subscribe
The US Commerce Department has blacklisted 28 Chinese security agencies and companies, restricting the licenses needed for trade with the United States.

Chinese video surveillance giant Hikvision has opposed the US move, stressing that the decision has no basis in fact, according to Chinese-based media reports.

A second company to strongly protest the US decision was the Chinese firm Megvii Technology specializing in image recognition and deep-learning software algorithms.

According to an official press release by the company, it will prepare countermeasures in response to the US action.

The US Commerce Department said that the restrictions were imposed on the Chinese companies over allegations that Beijing has cracked down on ethnic Muslims in the Xinjiang province. Over half of the targeted agencies are police departments affiliated with the so-called Xinjiang Uighur Autonomous Region People’s Government Security Bureau.

In late September, Beijing protested US remarks on allegations that the Chinese government was engaging in the widespread repression of the Muslim population of China’s northwestern Xinjiang Uyghur Autonomous Region.

“I would like to point out that the Chinese party expresses strong discontent and protest over US discussions of the so-called human rights crisis in Xinjiang, defaming the Chinese religious policy and interference in its internal affairs”, Chinese Foreign Ministry spokesman Geng Shuang said at a press briefing.

Geng pointed out that the Xinjiang Uygur Autonomous Region was facing problems related to separatism and terrorism, not only sectarian tensions.

“The Chinese government has always paid much attention to the development and stability of Xinjiang, as well as ensuring freedom of religion for all peoples, living in Xinjiang”, Geng added.

In an August 2018 report, UN experts on the elimination of racial discrimination reported that up to 1 million ethnic Uyghurs were being be held in 're-education camps'.

Beijing has heatedly denied the existence of such camps, saying that the accusations have not been substantiated, claiming instead that the reported detention facilities are vocational colleges set up as part of counterterrorist efforts.

000000
Popular comments
It would certainly help if the US would first substantiate its accusations. Scores of ambassadors did in fact visit both, Xinjiang and the vocational centers and did not find what the US claims. Which means, that Trump now does the same with China as with Russia: impose sanctions, tariffs and trade limitations based on rumor and smear propaganda by the US or allied third parties, The goal is always the same: undermine the Chinese economy and use the strangulation as leverage for trade negotiations. No wonder, Trump can’t reach a reasonable trade agreement. Who would still trust the US?
Regula
8 October 2019, 08:45 GMT
000000
Newsfeed
0
New firstOld first
loader
LIVE
Заголовок открываемого материала
Access to the chat has been blocked for violating the rules . You will be able to participate again through:∞. If you do not agree with the blocking, please use the feedback form
The discussion is closed. You can participate in the discussion within 24 hours after the publication of the article.
To participate in the discussion
log in or register
loader
Chats
Заголовок открываемого материала
Worldwide
InternationalEnglishEnglishMundoEspañolSpanish
Europe
DeutschlandDeutschGermanFranceFrançaisFrenchΕλλάδαΕλληνικάGreekItaliaItalianoItalianČeská republikaČeštinaCzechPolskaPolskiPolishСрбиjаСрпскиSerbianLatvijaLatviešuLatvianLietuvaLietuviųLithuanianMoldovaMoldoveneascăMoldavianБеларусьБеларускiBelarusian
Transcaucasia
ԱրմենիաՀայերենArmenianАҧсныАҧсышәалаAbkhazХуссар ИрыстонИронауОssetianსაქართველოქართულიGeorgianAzərbaycanАzərbaycancaAzerbaijani
Middle East
Sputnik عربيArabicArabicTürkiyeTürkçeTurkishSputnik ایرانPersianPersianSputnik افغانستانDariDari
Central Asia
ҚазақстанҚазақ тіліKazakhКыргызстанКыргызчаKyrgyzOʻzbekistonЎзбекчаUzbekТоҷикистонТоҷикӣTajik
East & Southeast Asia
Việt NamTiếng ViệtVietnamese日本日本語Japanese中国中文Chinese
South America
BrasilPortuguêsPortuguese
NewsfeedBreaking
YesterdayPolisario’s Brahim Ghali Vows to Fight Morocco in Western Sahara Until UN Holds Independence Vote
YesterdayUS Afghan Envoy Zalmay Khalilzad Steps Down
YesterdayHezbollah Leader Declares Group Has 100,000 'Trained & Experienced' Fighters - Report
YesterdayUS Large Planes, Early Warning Assets Now More Vulnerable, Pacific Air Forces Chief Says
YesterdayEx-Top Brazilian Diplomat Calls for G20-Led Multipolar World to Tackle Post-COVID Issues
YesterdayBig Tech in 4-Day Winning Streak on Wall Street Sparked By Earnings Bets
YesterdayTrump Says Assault on Protesters Claims ‘Baseless Harassment’ After Hours of Deposition
YesterdayUS January 6 Committee Rejects Steve Bannon’s Refusal to Cooperate in Probe - Reports
YesterdayState Dept. IG Launches Probe Biden's Withdrawal From Afghanistan - Reports
YesterdayScottish Police Reports Powerful Blast in Residential Building in Country's Southwest
YesterdayMoscow Expresses Condolences Over Powell's Death, Says He Was 'A Patriot of His Country'
YesterdayProduction of Russia's Sputnik V in Mexico to Begin in Second Half of November - Reports
YesterdayTreasury to Use ‘Extraordinary Measures’ Through December 3 to Avoid Debt Ceiling
YesterdayTop 10% of Richest Americans Own About 90% of Stocks on US Markets - Report
YesterdayProject Veritas Source Says Asylum Claims to be ‘Fast-Tracked’ Without Congress Oversight
YesterdayChicago Chief: ‘Unvaccinated Cops Face Denied Retirement Benefits’
YesterdayTrump Sues House Panel Probing January 6 Events
YesterdayDOJ Asks US Supreme Court to Re-suspend Texas’ Anti-Abortion Law After Lower Court Drops Ban
YesterdayWhite House Declines to Comment on Report China Tested Nuclear-Capable Hypersonic Missile
YesterdayTrump to Give Sworn Deposition in Mexican Protesters’ Lawsuit