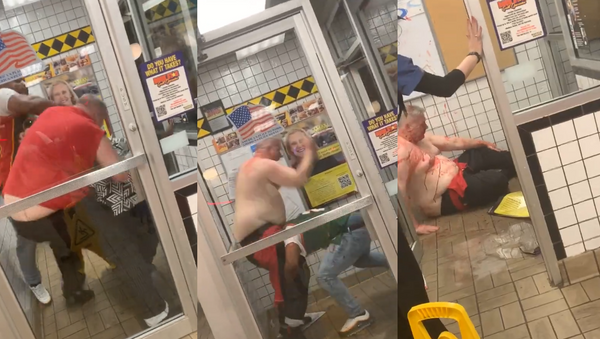 Georgia police are on the hunt for two suspects after an early morning melee at a Gwinnett County Waffle House left a man bloodied and battered outside the restaurant’s entrance.

Patrons at a Waffle House in Snellville, Georgia, witnessed a scene quickly escalate after a man in a red shirt bumped into another customer while waiting to pick up a to-go order at around 1:30 a.m on September 22.

According to a release from the Gwinnett County Police Department, the second customer, accompanied by another guest, “became aggressive” after being bumped into and told the man awaiting his order to “meet him outside.”

A bystander was able to capture the fight that ensued after the red-shirted man collected his to-go order and was confronted by the alleged aggressor (wearing a green jersey) and his accomplice.

One woman is heard repeatedly saying "oh my God," as the red-shirted man struggles to defend himself against the duo. The two suspects allegedly fled the scene in a black Dodge Challenger after leaving the victim shirtless and bloodied.

“The victim’s injuries were treated by EMS personnel at the scene,” noted the news release. However, authorities did not reveal the extent of his injures.