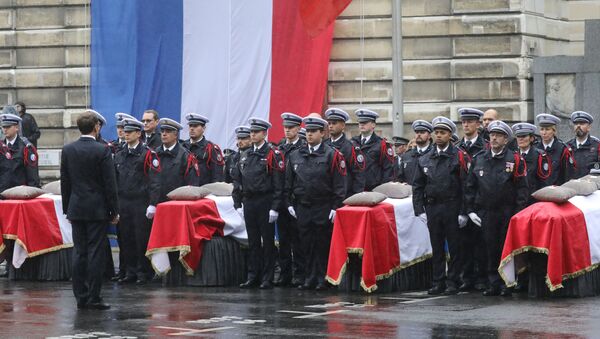 Media reports said on Monday that French investigators had found a flash drive carrying materials with Daesh* terror group propaganda while checking the house of the man who stabbed four colleagues at the Paris police department last week.

French President Emmanuel Macron has called on the entire nation to mobilise against Islamism.

"We will wage an unrelenting fight in the face of Islamist terrorism," Macron told a ceremony at the police headquarters where four police officials were killed by their radicalised colleague last week.

Michael Harpon, 45, stabbed four of his colleagues at the Paris police headquarters. The attacker was shot dead by police after the incident. According to media reports, Harpon converted to Islam some years ago and showed signs of radicalisation, including support for the 2015 Charlie Hebdo shooting and a series of co-ordinated attacks on 13 November in Paris, which claimed the lives of 130 people. He had reportedly worked as an IT specialist in the intelligence directorate of the Paris police headquarters since 1993 and possibly suffered frustration due to lack of promotion.

Investigation of the Attack

An investigation into the attack was launched and later handed to the anti-terrorist prosecutor's office.

On Monday, media reports said the French investigators had found a flash drive carrying materials with Daesh* propaganda as they checked Harpon's house. According to Le Parisien, the flash drive contained video clips with Daesh-related materials as well as addresses and personal information about Harpon's colleagues.

The attacker, who was reportedly deaf, is believed to have married a Muslim woman named Ilham in 2014 and had two children with her. Ilham was also arrested after the attack but was freed days later and was not charged.

After the attack, the opposition called on France's interior minister Christophe Castaner to resign. The minister admitted that the opportunity to prevent the killing of the officers was missed but added that he would not step down over the tragedy. He said that since 2003 the French police had prevented 59 terror attacks.

*Daesh (IS, ISIL, ISIS, Islamic State) is a terrorist organisation banned in Russia and many other countries.