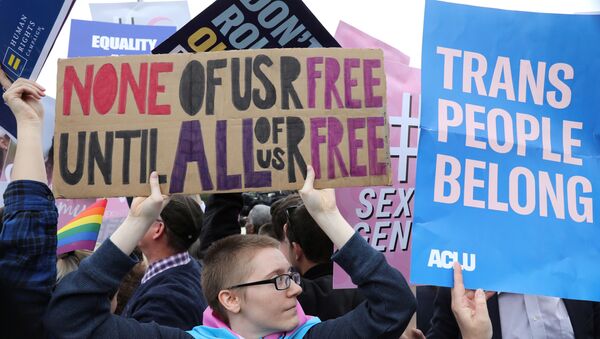 The US Supreme Court heard arguments Tuesday concerning anti-discrimination protections for LGBTQ people, and in coming months will hear a key abortion rights case. Advocates’ feelings are mixed about the expected outcomes, but they agree that regardless of the court’s ruling, a mass movement to protect women’s & LGBTQ rights must continue to grow.

The nation’s highest court began a new session on Monday, hearing on Tuesday a trio of cases that will collectively decide whether or not anti-discrimination protections covering sex prejudice in employment also cover sexuality and gender identity. Another case soon to be heard could pose a major threat to abortion rights and pave the way for overturning the court’s previous ruling in the 1973 Roe vs. Wade case, which provides the foundation for the legal right to have an abortion in the US.

“All three of these cases present tremendously significant issues and with very broad-reaching implications, depending on how the court goes here,” Julie Hurwitz, a civil rights attorney and partner at the Michigan law firm Goodman, Hurwitz and James, told Radio Sputnik’s Loud and Clear Tuesday.

One case, RG & GR Harris Funeral Homes v. Equal Employment Opportunity Commission, concerns the case of Aimee Stephens, a trans woman who was fired in 2013 after she came out as trans and told her boss she would begin transitioning to a feminine presentation.

Two other cases, Bostock v. Clayton County, Georgia; and Altitude Express, Inc. v. Zarda, involve discrimination based on sexuality. Gerald Bostock was fired from his clerical job with Clayton County in 2013 when his boss discovered he played in a gay softball league, and Donald Zarda from his job with skydiving company Altitude Express in 2010 after a customer complained about his homosexuality following a jump in which they were suited together.

“In two of the cases, the circuit court of appeals found, in fact, that these plaintiffs had been discriminated against. The issue is whether Title VII of the Civil Rights Act, which explicitly prohibits discrimination in employment on the basis of sex, whether gender identification or sexual orientation is sex within the meaning of that law,” the attorney told host Brian Becker. “It is mind-boggling to me that any human being in their right mind would find otherwise, but we are in very strange times, and this country is on a very strange trajectory, and given the balance of the court politically … anything could happen.”

Here is the crux of the whole day, from Sotomayer: “At what point does this Court permit invidious discrimination against groups?” pic.twitter.com/ShUfJwzhFq

​About 500 people turned out to support the LGBTQ people and their lawyers arguing before the court, demonstrating outside the Supreme Court Building in Washington, DC.

“I’m happy to be joining what is a really fantastic turnout for what is a really historic case,” Gillian Branstetter, spokesperson for the National Center for Transgender Equality, told Sputnik Tuesday outside the court.

“The three cases that are in front of the Supreme Court are centering on the right of every person to live and labor without fear of prejudice or ignorance because of who they are or who they love. I think that there is a mountain of legal precedent, a mountain of logic on our side, but most importantly, the moral path of our nation is on our side,” she said. “If the Supreme Court has immense power not just to set the laws of our land but set the cultural path of our land, and to declare exactly what kind of country we want to be - I think that if this is an independent court, if it’s a court that has not allowed the Trump administration and the far right’s bigotry to enter its decision-making, then I think we’re looking forward to a good result.”

I spoke with @GBBranstetter outside #SCOTUS this morning, she told me "if this is an independent court, if it's a court that has not allowed the Trump admin & the far-right's bigotry to enter its decision-making, then I think we're looking forward to a good result." pic.twitter.com/C6Ta3yye7D

​“Either way, this is a monumental opportunity for transgender people to show exactly how strong we are,” Branstetter told Sputnik. “To show exactly how resilient we are, and to show how we are not going to let anything erase us. We are not going to let anything knock us down. My executive director said it best: sometimes when a door is slammed in your face, the only thing left to do is kick it back in.”

Branstetter noted that legal precedent derives at least as far back as the 1989 case Price Waterhouse vs. Hopkins, in which the Supreme Court ruled that “in forbidding employers to discriminate against individuals because of their sex, Congress intended to strike at the entire spectrum of disparate treatment of men and women resulting from sex stereotypes,” as then-Justice William J. Brennan Jr. wrote in his majority opinion.

"This is a monumental opportunity for #trans ppl to show exactly how strong we are, how resilient we are & to show how we aren't going to let anything erase us," @GBBranstetter said. "Sometimes when a door is slammed in your face, the only thing left to do is kick it back in." pic.twitter.com/sTghHllt9b

​“Title VII was intended to make sure that men were not disadvantaged relative to women and women were not disadvantaged relative to men,” Pamela S. Karlan, a Stanford Law professor and one of the lawyers who argued the case before the court, told the justices Tuesday morning. “And when you tell two employees who come in, both of whom tell you they married their partner Bill last weekend, when you fire the male employee who married Bill and you give the female employee who married Bill a couple of days off so she can celebrate the joyous event, that's discrimination because of sex.”

“Frankly, it’s important for people to understand that it’s not just LGBT rights today - everybody’s rights are on the chopping block,” Branstetter said. “If you do not match what your employer thinks makes somebody a man or makes somebody a woman, then your rights are at risk today. Unless you are Ron Swanson or Barbie, you have a lot to worry about with this case.”

"People are optimistic. Trans ppl are concerned & somewhat rightfully so" about a potential reversal, @GBBranstetter said, but "a lot of that progress is in each & every trans person" who changes the minds of ppl in their life. "That can't be undone, no matter what happens here." pic.twitter.com/d0hQLn85Hv

​Another case, June Medical Services v. Gee, will be heard later in the court’s session and concerns a Louisiana law that greatly restricts women’s access to abortion services by making extensive medical licensing a requirement for practitioners, and which challengers say should be struck down, since it is nearly identical to another law in neighboring Texas already invalidated by the Supreme Court in the 2016 case Whole Woman’s Health v. Hellerstedt.

“This is even more frightening: the right to choose is on the chopping block,” Hurwitz told Sputnik. “Whether or not the court actually overturns Roe v. Wade during this session remains to be seen, but I think all reasonable minds agree that if not now, certainly this is on the way, and we all need to be prepared to wage a very strong political fight once Roe v. Wade is overturned - and I believe it will be. Not in this case, because what they’re going to find in this case is that this was a reasonable law, ‘we’re not prohibiting the right to an abortion, but the states have a right to reasonably restrict access, and because there’s one doctor in the state who is eligible to perform abortions, then that’s fine.’ And that’s just one step closer to an all-out overturning of Roe v. Wade.”