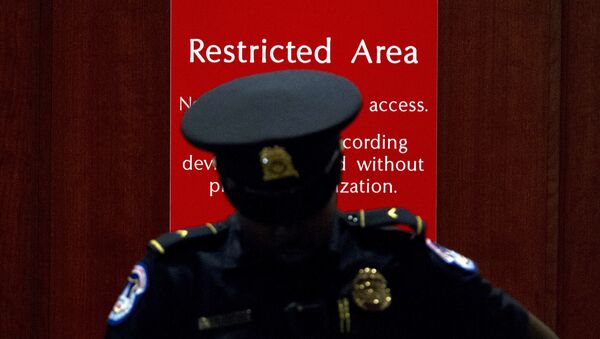 After Donald Trump said he deserved to “meet” his accuser and demanded to know who gave the whistleblower the information on his conversation with Ukraine’s president, the whistleblower’s legal team expressed concern for their client’s safety.

Democratic members of Congress are considering obscuring the identity of the intelligence officer whose whistleblower complaint has triggered an impeachment inquiry into President Donald Trump, the Washington Post reports.

Officials familiar with the matter told the newspaper that Democrats in the US House of Representatives are weighing whether to allow the whistleblower to testify away from Congress via a video link, concealing the officer’s appearance and altering their voice.

Other options under consideration are said to include placing the whistleblower behind a screen or partition or conducting an audio-only testimony.

“There are lots of different protocols and procedures we’re looking into to find out what works and doesn’t work to protect the identity of the whistleblower,” a Congress insider was quoted as saying. “That is paramount.”

The whistleblower has agreed to testify to the intelligence committees in both the House and Senate. Whatever measures are in place for the individual’s meeting with the House investigators, a testimony to the Senate committee will have to have the same conditions, said Mark Zaid, a member of the whistleblower’s legal team.

The testimony could take place “within the next couple of weeks”, but no specific date has been set yet, an unnamed US official told the Washington Post.

The whistleblower complaint, filed in August with the inspector general of the intelligence community, revolves around a July phone call Donald Trump had with Ukrainian President Volodymyr Zelensky.

The report – based on second-hand information from other intelligence officials – alleges that Trump has “pressured” Zelensky into investigating former US vice president Joe Biden (his leading Democratic rival in the 2020 election) and his son Hunter Biden. The whistleblower suggested that Trump had withdrawn $400 million in military aid to Ukraine prior to the call as a quid pro quo; a rough transcript of the conversation shows that Trump did ask Zelensky to “look into” the Bidens, but it remains to be proven whether he had used the suspension of funds as leverage to pressure his counterpart.

President Trump has denied any wrongdoing and repeatedly labelled the impeachment inquiry a “witch hunt”. He also said he wants to meet his accuser and suggested that the person who tipped off the whistleblower may have been “spying” on him.

House Democrats have condemned Donald Trump's comments as “witness intimidation”, while lawyers representing the whistleblower have claimed that a $50,000 “bounty” was issued for information on their client’s identity and voiced concerns about Trump’s remarks.

Meanwhile, a second whistleblower emerged over the weekend claiming to have “direct knowledge” of the alleged plot by Trump to extort Zelensky.

Depositions have also been scheduled over the next two weeks, with five State Department officials who may have knowledge of the issue. These officials include former US envoy to Ukraine Kurt Volker and US ambassador to the EU Gordon Sondland. The House Intelligence Committee will question Sondland later in the day over the first whistleblower’s allegations that he had met with Zelensky to advise him on how to “navigate” Trump’s demands for a probe into Biden.