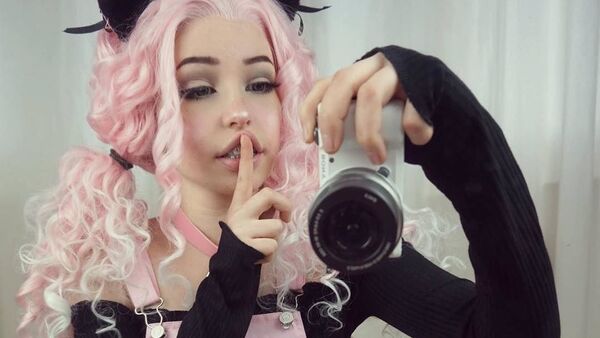 © Photo : elledelphine4life/instagram
Subscribe
The British social media personality rose to infamy over the summer after selling her bathwater for $30 per jar. It appears that she has now pulled a less innocuous stunt and spray-painted the car of a girl who stole her pet.

Belle Delphine has taken to Twitter after a two-month break from social media to drop bombshell news that she’s been arrested.

Delphine, an internet celebrity and cosplay character, has posted a purported mugshot of herself with ruined mascara, with the caption, “I got arrested lol”.

According to the watermark, the blogger was arrested by the Metropolitan Police – although UK police normally release mugshots of convicted criminals, and not of the suspects facing charges.

The announcement has still made waves on Twitter and has garnered over 150,000 likes since it was posted, with users suggesting the arrest had something to do with tax fraud or, as a popular humorous theory put it, with the sale of her infamous bathwater.

But Delphine, 19, gave her account of what happened in a subsequent tweet. The British “gamer girl” said she vandalised the car of a girl who had allegedly stolen her hamster at a party.

According to a picture Delphine shared, she painted, “B**ch! Give me my hamster back” across the car, along with a picture of Pepe the Frog. “I spray painted the f*** out of her car and got arrested, at least I got my hamster back,” she recounted. The Met is yet to comment.

These claims became the first signs of her social media activity in the past two months: Delphine vanished from the radars in early August, after Instagram removed her account as some users reportedly flagged it for nudity and pornographic content.

It is still not clear whether Delphine is facing any charges, and some users suspected that the provocative “gamer girl” could well be trolling a conspiracy theory suggesting that her radio silence had something to do with “legal trouble”.

Shortly before the story with Delphine’s alleged arrest emerged, comedian blogger Ethan Klein claimed in a viral YouTube video: “Her real store is offline, which makes me wonder if she got into legal trouble. Because shipping bathwater, I don't think it's legal.”