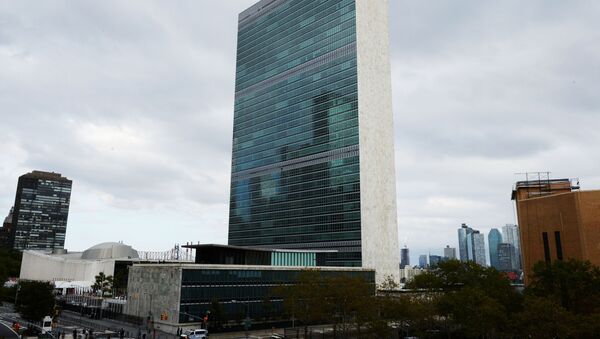 © Sputnik / Natalia Seliverstova
/
Go to the mediabank
Subscribe
International
India
Africa
UNITED NATIONS (Sputnik) - The United Nations General Assembly Sixth Committee - which deals with legal issues - following the First Committee, had taken a pause in its work due to the problems that diplomats have faced when trying to obtain US visas, according to Russia's Deputy Permanent UN Representative Gennady Kuzmin.

"Consultations on this issue are ongoing. The main reason is the behavior of the host state, which does not issue visas to both Iran and the Russian Federation, the Cuban delegation and many others [...] I think this characteristic demarche [taking a pause] happened in the First Committee, in the Sixth Committee", Kuzmin said on Monday.

Kuzmin explained that upon the adoption of the program of work of the Sixth Committee, the delegation of Iran stated it was not ready to support its adoption, citing issues with obtaining US visas and limitations of movement imposed on diplomats in New York.

The Russian envoy said that he expects UN Secretary-General Antonio Guterres to consider addressing the visa problem with the host country of the UN headquarters - the United States.

"We hope that the Secretary-General is aware of the situation, that he will consider using the prerogative granted to him within the framework of the UN headquarters that involves consultations with the host country, including the process of arbitration between the United Nations and the United States", Kuzmin concluded.

Earlier on Monday, a diplomatic source said that the work of the First Committee had been paused until 10:00 a.m. (EDT) on Tuesday because of the problems related to issuing US visas to diplomats from a number of delegations, including the Russian delegation.

UN Spokesperson Stephane Dujarric said that the United Nations has been addressing the issue of the United States denying visas to Russian diplomats - who were set to participate in the work of the UN General Assembly First Committee - at different levels.

On Thursday, Russia’s Deputy Ambassador to the United Nations Dmitry Polyanskiy proposed to shift the location of the First Committee - which deals with questions of disarmament and international security - from New York to Vienna or Geneva, citing obstacles Russian diplomats have faced when trying to obtain US visas.