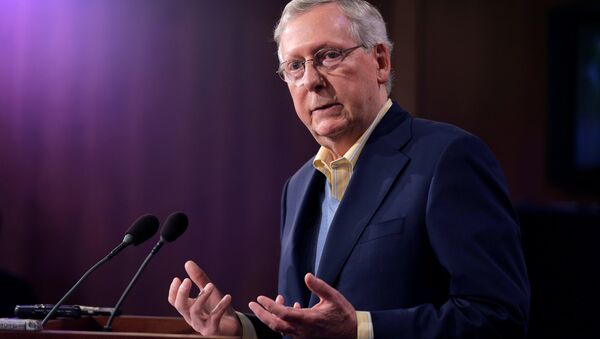 © REUTERS / Joshua Roberts
Subscribe
Senate Majority Leader Mitch McConnell accused Speaker of the House Nancy Pelosi of being "in the clutches of a left-wing mob" and was being forced to proceed with impeachment proceedings against President Trump.

McConnell, 77, who is seeking his seventh consecutive term as a Republican Kentucky senator, made his point in a digital campaign ad that first aired last week, backing up his consistent support of the president.

“Nancy Pelosi's in the clutches of a left-wing mob,” McConnell says from between the ears of a symbolic elephant portrait. "They finally convinced her to impeach the president ... All of you know your Constitution. The way that impeachment stops is a [Republican] Senate majority with me as majority leader."

The Republican senator from Kentucky, who is seeking his seventh consecutive term and to remain the majority leader of the Senate, a post he has held since Republicans regained the majority during the 2014 midterm elections, also asked supporters to ”contribute before the deadline."

Earlier McConnell, who recently referred to himself as the "grim reaper" of socialist Democratic legislation passed by the House of Representatives, said that he would have no choice but to bring impeachment to a vote in the Senate if the House majority passed such a resolution.

"It’s a Senate rule related to impeachment that would take 67 votes to change, so I would have no choice but to take it up,” he said at the time. “The Senate would have to take up an impeachment resolution if it came over from the House."

000000
Popular comments
Nobody can stop the impeachment process...
netman
7 October 2019, 08:06 GMT
000000
netman, The Senate can. It can even decide to do nothing, and there will be no impeachment. But anyway, it;’s a foregone conclusion, Trump won;t be impeached. THe Dems are losing massively in the public opinion, they will lose the presidential and the house for sure.
chrrev
7 October 2019, 08:48 GMT2
000000
Newsfeed
0
New firstOld first
loader
LIVE
Заголовок открываемого материала
Access to the chat has been blocked for violating the rules . You will be able to participate again through:∞. If you do not agree with the blocking, please use the feedback form
The discussion is closed. You can participate in the discussion within 24 hours after the publication of the article.
To participate in the discussion
log in or register
loader
Chats
Заголовок открываемого материала
Worldwide
InternationalEnglishEnglishMundoEspañolSpanish
Europe
DeutschlandDeutschGermanFranceFrançaisFrenchΕλλάδαΕλληνικάGreekItaliaItalianoItalianČeská republikaČeštinaCzechPolskaPolskiPolishСрбиjаСрпскиSerbianLatvijaLatviešuLatvianLietuvaLietuviųLithuanianMoldovaMoldoveneascăMoldavianБеларусьБеларускiBelarusian
Transcaucasia
ԱրմենիաՀայերենArmenianАҧсныАҧсышәалаAbkhazХуссар ИрыстонИронауОssetianსაქართველოქართულიGeorgianAzərbaycanАzərbaycancaAzerbaijani
Middle East
Sputnik عربيArabicArabicTürkiyeTürkçeTurkishSputnik ایرانPersianPersianSputnik افغانستانDariDari
Central Asia
ҚазақстанҚазақ тіліKazakhКыргызстанКыргызчаKyrgyzOʻzbekistonЎзбекчаUzbekТоҷикистонТоҷикӣTajik
East & Southeast Asia
Việt NamTiếng ViệtVietnamese日本日本語Japanese中国中文Chinese
South America
BrasilPortuguêsPortuguese
NewsfeedBreaking
06:05 GMT'We're on the Edge': UK Gov't Urged to Enact 'Plan B' to Prevent NHS Crisis Amid Rise in COVID Cases
05:58 GMTIsrael & Sudan a Year After Normalisation: Relations Haven't Taken Off, Here's Why
05:00 GMTNew Material to Protect Against Radiation Created in Russia
04:25 GMTMultiple Casualties Reported After Explosion Hits Bus in Damascus, Syria - Photos, Video
04:03 GMTTime's Up, Jeffrey: New Documentary Shows Epstein Claiming to Support Anti-Harassment Movement
02:49 GMTBuilding 'Metaverse': Facebook Plans to Change Its Name Next Week - Report
02:42 GMTPhoto: Texas Gov. Mocks Illegal Immigrants Trying to Cross the Border in Camouflage
02:27 GMTAlyssa Milano Arrested at Protest Outside White House for Refusing to Obey Police
02:05 GMTFBI Agents Leave House of Deripaska's Relatives in Washington, Correspondent Says
01:41 GMTEcuador President Declares State of Emergency Amid Rise in Violent Crime
00:57 GMTUS Law Enforcement Unions Decry 'Defund the Police' for Rise in Assaults on Officers - Report
00:52 GMTLabor Activists Hail ‘Striketober’ as Over 100,000 Union Workers Across US Prepare Work Stoppages
00:46 GMTUS House Committee Advances Resolution Calling for Criminal Contempt Charge Against Bannon
00:38 GMT'Ye' Surprises Yet Again: Users Mock Rapper's New Haircut
00:19 GMTBiden Admin. Not Seeking to Make States Choose Between Working With US or China, Blinken Says
YesterdayCENTCOM Chief, UAE Defense Brass Talk Keeping Pressure on Daesh in Iraq, Syria
YesterdayPhotographer Claims He Filmed Aliens Neutralizing Nuclear Missile Mid-Air - Report
YesterdayUS Senate Panel Advances Bill to Impose Sanctions Tied to South China Sea Issues
YesterdayOver Three-Fourths of US Republicans Want Trump to Run for President in 2024 - Poll
YesterdayBrazil's Senate Accuses Bolsonaro of Mass Homicide as Herd Immunity Policy Fails - Reports