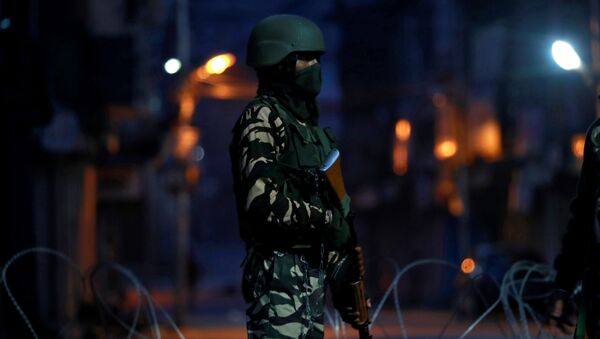 New Delhi (Sputnik): Despite strict a clampdown and patrolling by troops and the state police, a large number of militants have managed to sneak into Jammu and Kashmir across the Line of Control – the de facto boundary dividing the two territories of Kashmir under the administrative control of India and Pakistan.

Security agencies have set up a counter-infiltration grid in the state and have eliminated several would-be infiltrators, foiling their attempts, yet many still remain active, said Dilbag Singh, Director General of Jammu and Kashmir Police.

"The number of active militants [in Jammu and Kashmir] is estimated at between 200 to 300," said Singh while interacting with journalists in the border district of Poonch on Sunday.

The police chief claimed to have information that Pakistan was trying to violate the ceasefire agreement and push a large number of militants into the Kashmir valley before the onset of winter.

Pakistani authorities are yet to respond to the allegations.

The government had imposed prohibitory orders and restrictions in the Kashmir region since early August after New Delhi amended Articles 370 and 35A  stripping the state of its special status. A large number of political leaders taken into preventive custody at that time, are yet to be released.

On Sunday, the state government allowed a delegation of the Jammu and Kashmir National Conference to meet their former Chief Ministers – Dr Farooq Abdullah and Omar Abdullah, the first such meeting after both were taken into preventive custody, in early August.

The government has also allowed a delegation from the Jammu and Kashmir People's Democratic Party to meet their leader and former Chief Minister Mehbooba Mufti, who is also in preventive custody.

Singh claimed, the situation in the state has improved considerably, adding that it was peaceful in the Jammu and Ladakh regions.

"Today, the movement of traffic was heavy in Srinagar, and there were traffic jams in some places. The markets have started opening and so have businesses," he claimed.

Kashmir remains a major bone of contention in relations between India and Pakistan since both countries claim the entire territory while administering parts of it.